The weekend after Harrison was the weekend we tried to book after we went to Cultus Lake in Part 2. Now, I say "tried" because we didn't exactly get a reservation - there were no reservable sites for that weekend when I tried to book online.

We were able to reserve a site for Thursday night only, so our plan was to go on Thursday after work and try to get a first-come, first-served site. We were hoping since it wasn't a long weekend, the campground wouldn't be already full on a Thursday. However, if we didn't get a site for the weekend, then we would just stay the one night we had reserved. The only problem with our plan was that we were prepared to go away for 3 nights. So, when it came down to it, we WANTED to go away for 3 nights!

Unfortunately, when we got to Cultus, all sites at all 4 campgrounds were full. But at the front gate, they told us that there were some sites scheduled to be vacated in the morning (they couldn't give a definitive number). So, if we came to the gate early enough (she recommended 6am), we could potentially get one of the sites. We were torn. What if we stayed, waited in line at 6am and didn't get a site? What if we just took our chances and headed to the interior (probably Kamloops area) at 7:30pm that evening? Driving another 3 hours with already-cranky kids was not our idea of a good time, so we decided to stay the night and try to get a site in the wee hours of the morning. If we didn't get one of the vacated sites, then we would head to the interior.

So, Brian got up at 5am and was THIRD in line at the front gate at 5:30am! The gate opened just before 8am. There were 8 sites available. Phew! So, we have now learned that we will NEVER go to a provincial campground without reservations. It was NOT worth the stress and early line-up to just try to "wing it".

But we had another fabulous weekend at Cultus Lake. It was actually a perfect camping weekend - warm enough to spend time at the lake during the day, but cool enough to have a reason to have a campfire at night! AND, as it turned out, it was the last weekend before the campfire ban went into effect for the summer. So, no more roasting marshmallows (which Josh has been liking more and more) for the rest of our camping trips this summer. 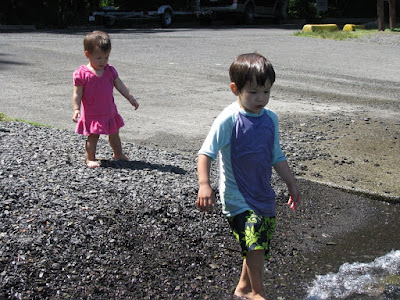 We spent quite a bit of time at the beach and Josh decided he wanted to ride his bike to the beach, so he got a bit of pedal time in too. We had wonderfully relaxing family time and it was a nice way to end a long stretch of camping. We have a couple more camping weekends planned for the summer, but for now, we are going to enjoy summer activity close to home. And I think it will be nice to take a break from packing up the trailer on Thursday night and unpacking on Sunday night! 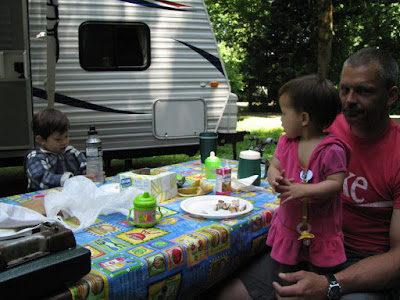