Yes, you guessed what this post is about! It's a bit of a revelation, actually. If you feel like you've never found the perfect-fitting bra, read on...

I had an opportunity to be sans kids on Saturday, so I took that opportunity to go bra shopping and FINALLY get a proper bra. I just finished nursing (for the last time!) a few weeks ago, so I thought it would be a good time to start back into "normal" bras.

I was told that there was a store on the west side of Vancouver that did the best bra fittings. I was skeptical. I mean, how much more could I get a bra to fit me, right? But in the world of shopping, I'm willing to try anything once! So off I went...

It was difficult to find the store because my girlfriend knew where the store was but she couldn't remember the name. So, I wandered into the store called Bare Basics Lingerie on West 10th Street and hoped for the best.

And it was the best. Seriously, I can't believe that I have never been wearing the right bra! Not to get too technical, but I have never been able to wear a bra so that the intersection in the middle of the chest actually rests on my chest. I've tried going up and down the band scale and up and down the cup scale and I've never had a bra rest nicely in the middle of my chest. So, I just resigned myself to the fact that the bra didn't have to rest right on my chest, as long as it was close.

Well, it turns out that I just hadn't found the right bra! Not only do you have to wear the proper-sized bra, but you also have to find the RIGHT bra. Period. So, all these years I've been trying on or wearing all these bras - WonderBra, Warner's, Maidenform, Jockey, Triumph, Victoria's Secret, La Senza, La Vie en Rose, Calvin Klein, etc. - it wasn't that I wasn't wearing the right-sized bra. It's just that they didn't have a bra that actually fit me! Is that possible?! All those brands and sizes and NOTHING fits?! Well, I guess so, because Bare Basics lingerie carries a line of bras that actually fits me! And it only took them 2 tries to find that perfect bra for me!

What is this miracle bra brand, you ask?! It's a French company called Empreinte. The ladies at Bare Basics say it's their best-selling bra. And I know why! BTW, I would give you a link to the Bare Basics Web-site, but they don't have one yet. Quite a shame as I would highly recommend them.

So, all this missing out on the perfect bra for so long...there must be a catch, right? There IS a catch. And it's a biggie. I wanted to get a whole collection of these bras, but at that price, I settled for one for now. And if you are wondering how I could spend that much money on a bra, let me stress to you that I have NEVER had a bra fit me properly until now!

And the worst part is that now I have a bra that fits me, I'm not sure that I can just "settle" for other bras again. I envy women who are perfect 34B's and C's or whatever the cookie cutter build is for each size! Because I'm not. And for that, I pay the price. Literally.
Posted by Yvette at 9:30 PM 3 comments:

You may have noticed in previous blog posts that Aves is standing (and she's walking too!). I know I'm a bit slow on the posts these days, but despite missing the blog entries, we HAVE been capturing the moments!

Since she started crawling at around 9 months old, Aves never really showed interest in standing or cruising. She preferred crawling or being carried! Well, out of the blue, she started pulling herself up and standing on her own at the end of April. She would pull herself up, take one or two steps and fall down. However, when she wanted to really move, she would still get down on all fours and crawl.

The video below was taken on May 13th. At this point, she was taking several steps at a time and she was discovering that walking may just be faster than crawling. That transition from crawling to walking happened SO quickly!

So now, we pretty much have a toddler on our hands. She is quite stable, despite her teeny, tiny feet, but there tends to be alot of falling over and tears as a result of Josh's mischief and Nikita's overactive tail!

In the last couple of days, she has discovered independence (ugh!). She has been testing me by wandering off when we're out and making me chase after her. She will even walk away so I'm out of her eyesight! I'm shocked, given that she is pretty attached to me. I guess Mommy is the one that has to learn to start letting go...

Anyway, here's the video from May 13th. Oh yeah, and you'll notice she can say "Mama" really well, too, but with ALOT of coaxing... 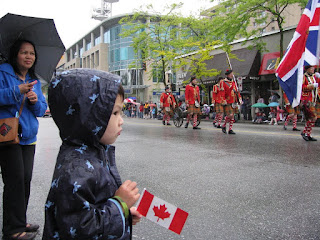 This past Saturday, we went to the Hyack Festival Parade. I've been trying to take the kids to a parade for the longest time, but it always seems like parade start times coincide with naps - many start around 1:00 or 2:00pm. Either that or the weather isn't ideal for standing outside on the street.

The Hyack Parade started at 11:00am, so it seemed like perfect timing. Unfortunately, the weather didn't co-operate on Saturday, but we threw caution to the wind, sported our rain gear and headed out anyway. Because at this rate, the kids will be adults before they ever see a parade!

I also haven't been to a parade in ages. We went to the Chinese New Year parade a couple of years ago, but we only caught the tail end of the parade and Josh was too little to understand anyway. So, this was essentially Josh's first parade. He loved it. He watched the whole thing, quite entranced by it all. He liked that he got handouts, like a rubber bracelet from the Army, a Canadian flag and, the best part (!), a couple of lollipops!

Aves wasn't too interested, though. I carried her in the baby carrier, so she couldn't see much anyway. She liked the music, but that was about it.

It wasn't a bad parade - not that I'm a connoisseur. Here are some of my thoughts on the parade:

- The American floats outdid the Canadian floats. I'm guessing that Americans love their parades because every American float was good. We had the occasional nice float that caught your attention, but we also had groups of people walking down the street holding a sign. Like, really, what is the point?!

- Cannons on a parade float should not be allowed to be continually fired throughout a parade. Especially when the route is lined with buildings on which the noise reverberates.

- Since when did a city's engineering department vehicles become parade-worthy?!

- I like parades. We need to go to more - it's a nice family outing. Especially if the kids like them, too!
Posted by Yvette at 9:48 PM 3 comments: