I quickly perused my blog posts and I don’t think that I’ve ever done a post on DIDO. Shocking.

We recently talked about this and we think DIDO started in 2005. At that time, the lives of our group of friends were shifting from our close-knit, Vancouver-centric lives to marriage and buying houses that forced us out of our centralized city locales. The bottom line was: we seemed to be seeing less of each other. One of my girlfriends came up with the idea of DIDO from one of her girlfriends, who was doing the same thing with a group of friends. The concept is simple: once every other month, we would take turns organizing a get together. We could either go to one of our houses and order in food or go out to eat - Dine In or Dine Out.

“We” is our group of 8 friends - 4 couples. When we started this, we mostly dined out. It was a great way to go to different restaurants and catch up with old friends at the same time. Bri and I introduced the first newcomer to DIDO probably at the beginning of 2007 - Josh. This added a new dimension to DIDO. We didn’t want things to change “too” much for just this one baby, so we tried to continue going out to restaurants. But, of course, the focus was much different for Bri and I. Also, everyone was keenly aware that mealtimes are much more…distracted with babies so we tried to go to more family friendly places. Even though we didn’t mean to, we slowly started to change the tone of DIDO.

Towards the end of 2007, M and J introduced their first newcomer to DIDO. Our group of 8 was now a group of 10 and growing!

Today, 7 years after starting DIDO, when we are lucky enough to get all 4 families out, we have to reserve a table for 14 - 8 adults and 6 kids. And we rarely get together JUST to go to a restaurant. These days, it’s all about the kids. We’ve done Canada Day celebrations, picnics at the beach or water park, Kris Kringle’s and countless dine in’s, because they are SO much easier than dining out!

MJME organized our October DIDO and managed to get 3 our of our 4 families out to the pumpkin patch last Sunday morning (LPD, we missed you guys!). It was pouring rain on the drive out to Langley and we almost turned around and headed for dim sum. But dumb luck (and lack of being able to get in touch with everyone to change plans!) brought us out to Aldor Acres. We thought it might be a short, wet experience, but then, part way through the morning, the clouds parted and we saw sun and blue skies. It turned out to be a perfect morning for the pumpkin patch (with some great photos below)!

The kids had a blast (mostly) and by the time we left Aldor Acres just after lunch, we were happy and thoroughly chilled. We decided to drop into Tim Horton’s for hot chocolate before the drive home, but we ended up in McDonald’s. It only took 7 years for us to end up doing DIDO at McDonald’s! Ha. The best part was that we actually managed to have an adult table and kids table for probably a good 20 minutes (possibly the beginning of a new DIDO tradition?!). It may not seem long, but with kids, that’s just enough time for us to have some good conversation and finish our hot drinks. Perfect.

It will be interesting to see how our DIDO’s evolve as the kids get older. I’m so happy that we’ve managed to continue our DIDO tradition for 7 years. To LES, MJME and LPD: we are so lucky to have friends like you! Thanks and PS: I think it’s our turn to organize for December DIDO!

Lately, Aves has had alot of practice mastering the art of the tantrum.  OK, who's kidding who?  There is no art to tantrumming.  It's a primal display of emotions and very, very irritating.

This is how the tantrum usually goes with me and Aves:

1. Aves is happily doing something.
2. Mom expresses discontent with the "something" Aves is doing.
3. Aves feels indignant and expresses discontent at Mom's discontent.
4. Mom emphasizes her discontent and indicates what she prefers Aves to be doing.
5. Aves starts crying.
6. Mom tries to calm Aves down at the same time maintaining her stance on the matter.
7. Aves crying continues to escalate (because she's not getting her way) until she has reached tantrum status.
8. Mom (surprisingly still calm in the face of a tantrum) calms Aves down.
9. Aves calms down a bit but remains indignant, muttering things along the lines of "hating" this and "no like" that.
10. Mom maintains her stance and tries to "reason" with Aves.
11. Aves crying re-escalates to a tantrum.
12. Go back to step 8 and repeat.

The last time this happened (on Tuesday), it took close to an hour to get Aves to calm down and not re-escalate.  This has been going on for awhile now and it seemed like we needed to try something new.  So the next time I saw Aves going down the tantrum path (on Wednesday!), I tried a different approach:

But Bri's mom had bought us a box of chocolates to celebrate our anniversary and we had already decided to share the box of chocolates for dessert (which is what prompted Aves to say that she wanted ice cream instead).

I wasn't about to cave in to her whims, especially in light of the fact that we don't do make-ups for bad behaviour the previous night!  I told her that we were having chocolate, not ice cream, tonight and she would have the ice cream another night.

Uh-oh.  Aves was ramping up (can you believe the child was having a tantrum because we were going to have chocolate instead of ice cream?!). 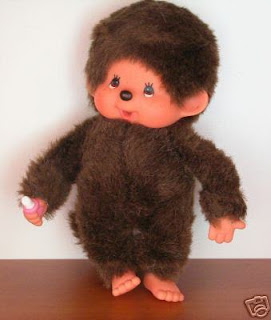 So, I ran into the living room and grabbed her girl and boy monchichis.  I went back to the kitchen and showed Aves that monchichi was talking into my ear.  I said, "Look, Aves!  Monchichi said he wants chocolate and not ice cream."  Aves stopped mid-whine, with wet eyes, and started laughing.  So I continued, "Are you sure you want chocolate, monchichi?" (I help monchichi give a nod).

Finally, I nonchalantly asked Aves, "See, Aves?  Do you want chocolate like monchichi?".

The smile abruptly disappeared from Aves' face and she said, "No.  I want ice cream."

bringing a gun to a rock fight

The kids are loving playing rock, paper, scissors these days.  Josh is pretty good at it.  There is seemingly no strategy to it, but Josh can beat me consistently.  We've even tried incorporating lizard and Spock.

Aves can't quite get the timing of saying her outcome with what her hands are doing.  It's pretty cute and we all get a kick out of it (including Aves).

This morning, we were out for brekkie and towards the end, the kids decided they wanted to play rps.  Aves was playing with Bri and I guess she got tired of losing/getting the timing wrong, because she decided to play the hand that trumped us all... 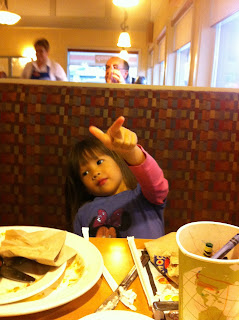 the road to vegetarian...

...is paved with turkeys and chickens.

Now that Josh is in Kindergarten and making sense of the world, he had all sorts of questions surrounding the Thanksgiving tradition of turkey on this past long weekend:

J: Mommy, are we having turkey for Thanksgiving?
Y: No, we’re having chicken.
J: Why aren’t we haven’t turkey?
Y: Because there are only 4 of us eating it.  Turkey’s are just big chickens.  Since we don’t have many people eating, we don’t need a turkey.
J: Do you think the turkey wants to be killed?
Y: (Ugh.  Seriously?!)  Uhhh…what do you think, Josh?
J: I don’t think the turkey wants to be killed.

I think at that point, I changed the subject because he caught me off guard and I didn’t know what to say!  But later on at dinner, the conversation came up again as we were eating our Thanksgiving chicken:

J: Mommy, do you think this chicken wanted to be eaten?
Y: Well, I don’t think the chicken was thinking about being eaten when it was alive.  Chickens have really small brains (good one, Mom!) so I don’t think that they think of much.  They are just happy to be running around (I’m considering my chicken was free range, of course!) and getting fed.
J: I don't think that chickens what to be eaten.
Y: (In my best trying to be empathetic voice) Well, Josh, if you don't want to eat chickens or turkeys, then you don't have to.  Just tell me and I won't give you any.

What else am I suppose to say when the kid is questioning the ethics behind eating fowl?!
Posted by Yvette at 10:34 PM No comments:

Today, Aves and I were driving home from the park. We were listening to music and singing along. Then, Aves says this to me:

“Mommy, when I grow up I want to be a singer…and set the world on fire.”

Wow. Why do I get the feeling that we’ve got our hands full with our little girl?!
Posted by Yvette at 10:00 PM No comments: