the boy and the girl

My son is SUCH a boy and my daughter is SUCH a girl...


Ahhhhh! a video by evelet on Flickr.
Posted by Yvette at 9:46 PM No comments:

Tonight after Josh went to bed, he came back down the stairs in tears.  This conversation ensued:

The reference to chicken pox is a remnant from a past conversation where Josh started asking me how we get chicken pox (no idea where he heard about it from!).  I tried explaining the virus thing, but apparently the concept didn't sink in.
Posted by Yvette at 9:24 PM No comments:

I think Daddy may have hit his limit for Wiggles songs... 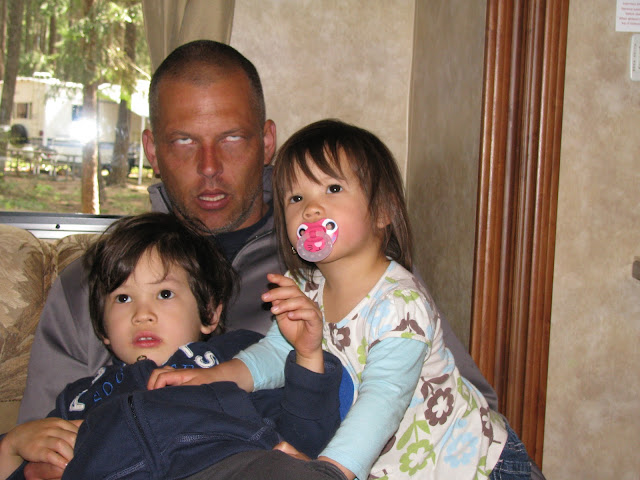 If you are not going to take me down to the water, then the water will have to come to me... 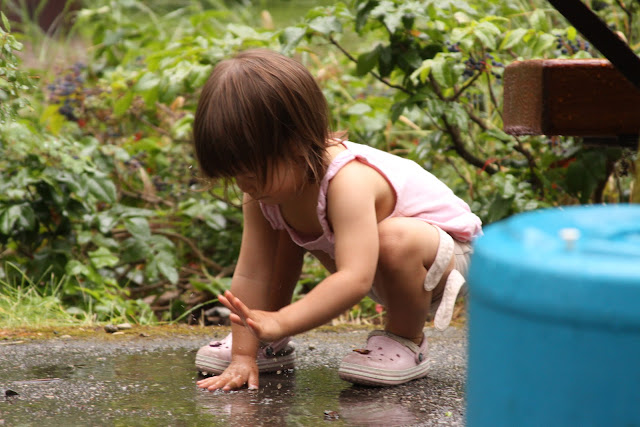 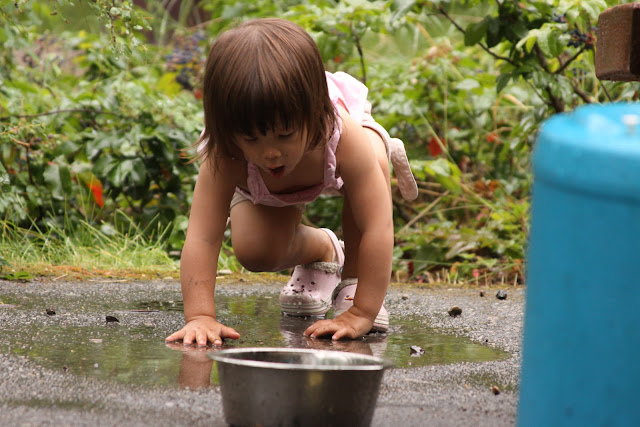 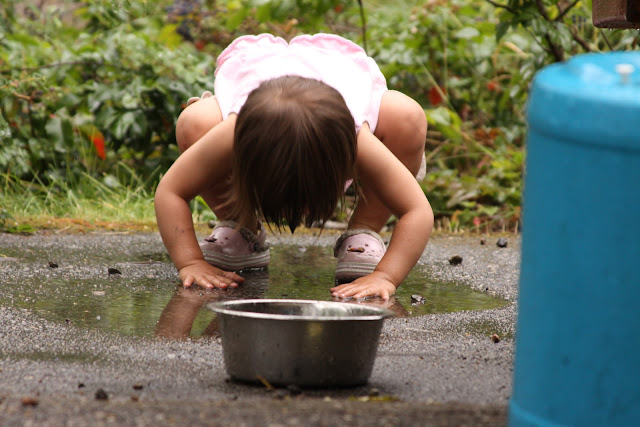 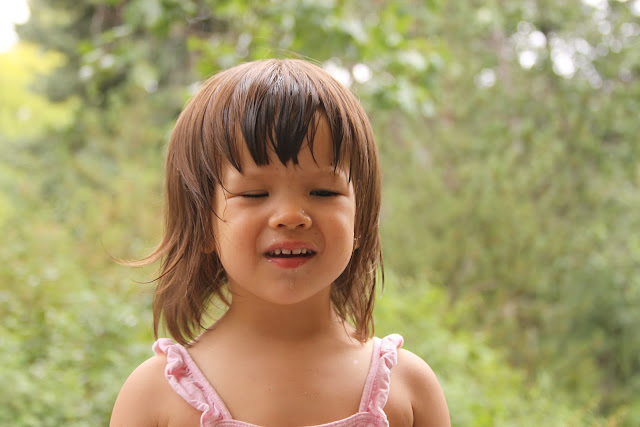 A switch went off in Josh's head this past week.  It's been amazing!

Last Monday, he started skating "camp".  We last put him in parent and tot skating in the Fall of 2009.  It was mostly an exercise in frustration and at the end of the class, he said he didn't want to do skating anymore, so we stopped.

This spring, he expressed interest in skating again, so I took him to a loonie skate session while we waited for the next session of lessons to start.  I was pleasantly surprised.  When we left off in 2009, Josh couldn't shuffle his feet without help and he couldn't get up by himself.  This was the first half hour of loonie skate, 1. 5 years later…


Back to last Monday - the next session of skating lessons FINALLY started and Josh was there in shorts, t-shirt and snowsuit!  Apparently, he has picked up where he left off in loonie skate!  He is tap-tap-tapping across the ice by himself.  When he falls down he gets back up by himself.  When he talks about it, he's very matter-of-fact about falling down and he likes going back for the lessons.  Amazing!

Then, Tuesday came around.  Tuesday's are swim lessons.  Josh has been consistently in swim lessons since he was 3.  I think this comes from having a Mom who can only survival swim and a Dad who was a couple of courses away from becoming a lifeguard.  In any case, progress has been slow.  Josh has been comfortable in the water for awhile, but front floats and back floats have been a struggle.  In order from him to pass his current class, he has to be able to do front floats and back floats unassisted.  He has been in this same place for quite awhile.

After much over-analyzing, we had just made the decision to stop swim lessons for awhile after this session.  And that same day, THIS happened (Josh is in the white top with blue sleeves)…


All of  sudden, Josh is floating and gliding ALL BY HIMSELF!  Now he loves swimming!  He can't get enough and keeps asking if it's a swim night every night.  I guess we won't be stopping swim lessons anytime soon.  Crazy awesome!

And if all of this accomplishment wasn't enough, Josh has been asking for us to take the training wheels off his bike since early summer.  We've been reluctant, because I was worried that Josh perceived himself to be riding a 2-wheeler like the "big kids" but the reality would be another exercise in frustration followed by despair.

So, after all his success earlier in the week, when Josh asked to take off his training wheels yet again while we were camping on Sunday, Bri obliged.  He chased Josh around the campground roads (perfectly level and paved for a beginner!) for about 45 minutes before we thought it prudent to call it quits.  We saw frustration setting in.  Josh could balance when he was moving, but was having difficulty getting started and stopping.  It was a great first ride!

The next night (Monday), we asked him if he wanted to go to the school and practice riding his bike and he said yes.  This is what we saw…


I seriously can't believe this kid!  He rode around for 45 minutes like that. Loving it.  He actually cried when we gave him 5 more minutes!

I'm not sure what it was that clicked in Josh's head.  It has been incredible for us to watch.  I don't know how else to say it, but I'm gobsmacked (and I don't even talk like that!)!  I think the best part for us is that Josh has just earned himself a few years worth of self-confidence all in one week.  We are so proud of you, Josh, and you should be so proud of yourself.
Posted by Yvette at 1:52 PM 3 comments:

Josh discusses the clock in his room:

Mommy, the big hand and the little hand don't move when I look at it.  They only move when I'm not looking at it.  I can be in the room (like when I'm sleeping) but I can't look at it.  Then, it will move.  The red hand (the second hand) is the only hand that moves when I'm watching it.
Posted by Yvette at 9:20 AM 1 comment:

I'm between jobs this week.  My last day at A was last Thursday and my first day at AI is next Monday.  I have a GLORIOUS week off to clear my head and prepare myself for my new role.

Now, I'm sure that one day my kids will read this and give me an earful, but for the week (at least the start of the week), I'm continuing the facade of going to work just so they don't get used to me being at home.  Of course, I come home a couple of hours later (to take Josh to skating!), but at least the kids think I'm still going to work.

I'm sure many of you parents are wondering if I'm doing this for them or me, and, truthfully, I guess it's a bit of both!  Here I am at Starbuck's on my second day off, enjoying my coffee, scone and free wifi for just a short while.

I am finding, however, that between 7:45 (my usual departure time) and 9:30 am, there is not much that can be accomplished.  I have phone calls to make and appointments to schedule, but most people are still commuting between these hours.  I'm not getting much done in the way of errands at this hour.  Instead, I'm skyping with my peeps back east, organizing a plethora of photos since Fall 2010 and catching up on my blog.

Not a bad way to spend a couple of hours each morning...
Posted by Yvette at 9:19 AM 3 comments:

We went camping at Bear Creek Provincial Park in the Okanagan this past weekend.  I don't think its been a typical Okanagan summer, but it was fine by us Lower Mainlanders who have yet to see summer!

We had rain clouds come and go all Saturday afternoon and we even had a brief thunderstorm over dinner.  When the clouds rolled in and we took cover in our trailer, we managed to pass the time having a bit of fun...

Posted by Yvette at 7:09 AM No comments: