merry christmas to all

It was a Liem-centric Christmas this year.  Because of the trip back east, I did not make heroic efforts to get out a Christmas card.  So, in lieu of a mailed out Christmas card (an perhaps a new tradition?!), here is our Christmas card photo.

We wish you and your family much peace and love over the holidays and into the new year. 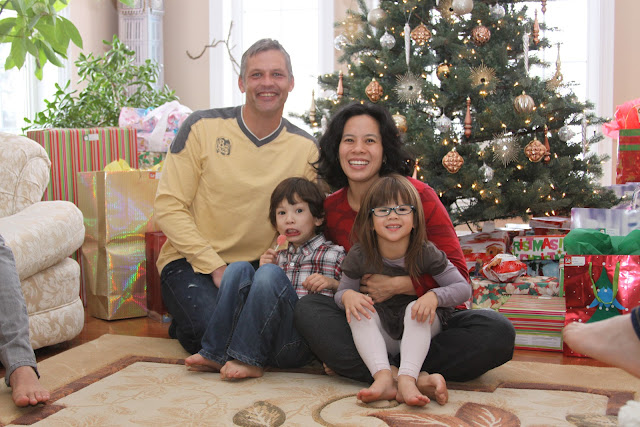 Happy Birthday, Grammy!  Love from all of your kooky grandkids... 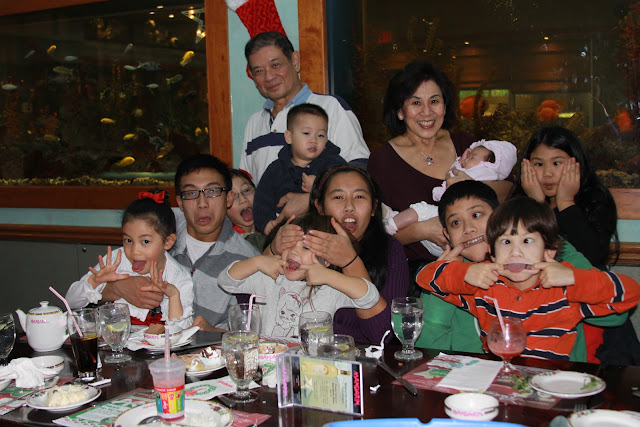 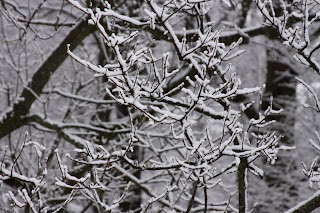 We've been back east for nearly a week now.  I've been complaining that we came all the way back here to find snow and instead, the snow turned up on the west coast!  We have essentially had typical west coast cloud and rain here in Toronto.

Well, apparently my complaints were finally heard.  We drove home from L&T's last night in freezing rain and wet snow.  And when the kids woke up this morning, Aves cried out "Look!  There's snow outside!'.

Since Josh is an old pro at snow now (ha!), he didn't say much.  But Aves could barely contain her excitement to go out and play in the snow.  It was killing her that she had to eat and brush her teeth before she could go outside.

When I rolled out of bed at my usual 10am (my body is stuck in PST!), the kids were just getting ready to go outside.  We went through the 15 minute production of getting their snow gear on and Brian took them outside.  I went to the kitchen to get a cup of coffee and I heard the door open.  Brian called me back to the door to get Aves undressed.  "Mommy, I'm not ready for the snow" is what she said.  Sigh.  So, I took off all those layers that we had JUST put on and then went back to the kitchen to get that coffee.  Not 5 minutes later, Aves comes into the kitchen and says, "Mommy, I'm ready for the snow now.".  Seriously?!

So, I gave her the 'if you go outside now, you have to stay outside with Daddy and Josh" lecture and dressed her up again.  Turns out, she was indeed ready now because she was just fine after that.

I was still in my jammies so I didn't go out right away.  It was a good thing because there was a knock on the door while I was inside.  It was Josh looking for a carrot for his snowman's nose.  I knew my mom wouldn't want me to use her produce for a snowman (we were never allowed to use it when we were growing up) but I rationalized that the carrot would be stored in a big outside fridge and we would eventually bring it back in to eat it.  When I brought the carrot, Josh asked for a banana.  I asked him what the banana was for (??!!) and he said the snowman's smile.  Ha.  Good thinking!  I couldn't deprive the snowman of his smile!

A little while later, there was another knock on the door.  This time, it was Aves.  She wanted a carrot and banana for her snowman!  I couldn't see another snowman outside, so I figured she hadn't built it yet and I told her to just share the snowman with Josh.  She gave me her whiny voice and pointed at her snowman that was peering out from behind a tree.  Damn.  I could hear my mom's appalled voice that I took all that produce, but how could I deprive my daughter of HER snowman's nose and smile?!

At this point, I relieved myself of produce smuggling duties and decided it was time to throw my jacket and boots on over my jammies.  I needed to get some photos of all this winter fun-ness. 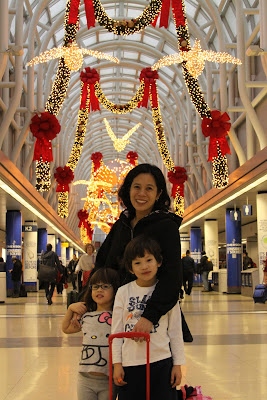 One of the many plusses of becoming a parent is that kids force you to slow down and take a look around (yes, stop and smell the roses.  But I didn't want to use that phrase because I used it about 3 blog postings ago.).

Yesterday, we had a layover at Chicago-O'Hare airport.  As we were walking through a busy concourse, Aves said, "Mommy, look up!".  I looked up and there was a wonderful display of Christmas lights in the skylight archway.  Wow.  If Aves hadn't stopped and told me to look up, I probably would have seen it, but not really "looked' at it.  Thanks, Aves.

Then, as we were walking through that same concourse, I was reminded of the scene in Home Alone when the family was running through O'Hare (around the 12 second mark in this video). I couldn't help but to feel relieved that we didn't have a layover that forced us to do the same dash (though we did cut it a tad close at Sea-Tac!).

Oh yeah, and as we settled into my parent's place, my dad flicked on the tv and low and behold, Home Alone 2 was on!  Of course, we had to watch it. 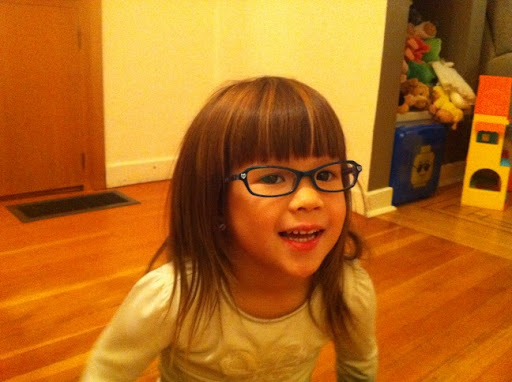 Tonight, Aves wanted to sing the alphabet, but she wanted to alternate the letters between her and I. So I started with A and she followed with B and so on. I thought this would be interesting, because it would show if she really understood the letters. It was going well and I was very impressed that she knew the letters! Then, I got to K. Ha. What did she follow K with? Elmo pee.

On another note, here’s some footage of Aves singing...

We had eggs for breakfast today...