The following weekend, we met up with Brian's brother, Mike, and his family at Cultus Lake Provincial Park - Maple Bay. Their friends were also there, so it was a 3-family camping trip.

This was our first time going camping with no water, sewer or electrical hook-ups. For those of you that don't know RV-speak, that means that the only amenities we had were the ones that the trailer could provide (i.e. water in the trailer's tanks and power from the trailer's propane and battery).

We actually did just fine without any hook-ups and it confirmed to me that I would MUCH rather be camping at a provincial park than an RV park. We've camped at provincial parks in the past, but for some reason, I thought having an RV meant we should be going to RV parks! I have NO idea why I thought that! Anyway, we loved Cultus Lake so much that when we got home, I tried to book a weekend in mid-July there too (see Part 4 of 5).

The other bonus with this camping trip was that Mike's family has a boat! So, not only did we go to the beach at Cultus, but we got out on the lake, too. Josh has been on a boat before (big and small!) but this was his and Aves first time on a ski boat (i.e. a boat that goes really fast!).

Aves was a bit cranky the whole time. She needed to be held. I'm not sure if it was the speed or wind or a combination of both. Josh was scared at first and claimed he wanted off, but once he settled into the noise and the wind, he quite liked it!

Then, I decided that since I was on a ski boat (and probably wouldn't get a chance to go again anytime soon) I better "ski". Mike had some wakeboards and wetsuits, so I geared up in whatever fit me best and got some water time. I had only been on a wakeboard once before - 8 years ago. But I was up for the challenge - after all, how much different could it be from snowboarding?!

After a bit of coaching from Mike and Colin and some untangling of the ski rope, I was ready for my first attempt. Remember: If you can't get up, then LET GO OF THE ROPE! A valuable lesson I learned waterskiing on the salty ocean water on Bermuda!

So, as expected, I didn't get up on my first attempt. It was a valiant effort, but I eventually let go of the rope. Apparently, even though I expected this, Josh didn't! When the boat circled back to get me, I could hear Josh crying and quite beside himself! Once the boat was close enough and I could re-assure Josh I was fine and having fun, he kept telling me that I had to come back in the boat!

I was shocked by his reaction. I'm not sure what was traumatic for Josh - maybe it was seeing me go underwater (he's been obsessed with going underwater ever since) or maybe it was seeing the boat ride off without me! Either way, it took alot of reassurance that I was okay and having fun and we could try it again.

Surprisingly, I got up on the next try. You can see the video of me below adjusting to my wakeboarding legs! I had finally gotten up the courage to jump the wake and the wake took me out! It was loads of fun and made me miss snowboarding. I got tired pretty fast and it took many tries before I was back up and riding. I managed to "jump" (or at least cross!) the wake a couple of times before packing it in.

Colin went after me (he was also a newbie to wakeboarding) and he managed to get on (and stay on) his feet very well. Josh made a point of reminding me of this by saying, "Mr. Colin did a great job!" and never once telling me that I did a great job! Sigh...

After dinner that night, the "boys" (Mike, Colin and Brian) headed out again for some wakeboarding and kneeboarding. We went with them to the boat launch and the kids got to play at the beach for a bit before heading to bed. As the boys rode off to find flat water, we could hear Enrique Iglesias blasting from the boat sound system. Freakin' hilarious...

Besides the boating, we had a fun time camping with everyone. Nightime around the campfire always makes for good stories and laughs. On Saturday night, the girls turned in early and the guys stayed up to finish the booze and the firewood. Seeing as how Mike and Colin are trained firefighters, it sounded like a BAD combination to me! The next morning, Brian told some wild story about fire, gas, a bottle and a fireball that shot 15 feet in the air. Ai-yah! Anyway, it's always fun to go camping with others and we look forward to going with Mike and Carm again... 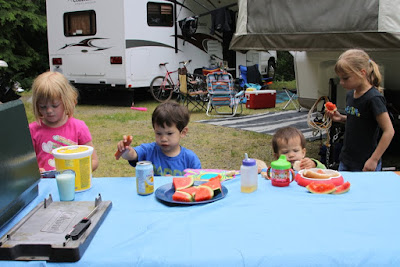