do you wanna build a snowman?

It’s rare in Vancouver to have a big dump of snow and then, 24 hours later, still have snow that hasn’t been rained on and hardened. This weekend, we had one of those rare mornings! When we woke up, the sun was shining brightly and snow that had fallen in the previous 24 hours was pristine!

Josh immediately said, “I’m going outside!” and Aves wasn’t going to be left behind! Tess asked Josh if he was going to build a snowman and in typical tween form he said, “I don’t build them anymore”. Fair enough.

Brian and I took our time getting ready and by the time we got outside, the kids had already been to the park and back. They'd clearly surveyed their surroundings! We got out the shovels and Josh said, “Dad, can you wait to shovel the driveway? I’m making a snowman.” Ha! Turns out, when you have ideal snowball-rolling conditions, even the most ‘tween’ of us can find that kid inside!

We decided it was better to build the snowman at school (a mix of surface area and quality of snow!). The end product was fun! Josh had this idea to use greenery for hair, so we trimmed our cedar hedge for hair! In the end, the kids decided to name him Jefferson. 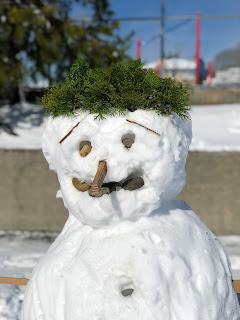 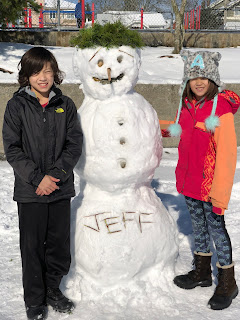 As we left to carry on with our day, Josh asked if he could kick down Jefferson. Of course, I said, 'Don't do that! Let's leave him up until he melts.' Apparently, my maternal 'every child is an angel' idealism got the better of me. When we drove past the school an hour later, the snowman had been kicked down. Some asshole(s) thought it'd be ok to kick down someone else's snowman!  😡  I guess I learned a valuable lesson that day: when your child asks to kick down his own snowman, let him.
Posted by Yvette at 5:49 PM No comments:

I had a conversation today.  One of my co-workers said his New Year's resolution is to create more content than he consumes.  Huh.  This is a very interesting resolution.  And kicks my thought process into high gear!  I'd say it is next to impossible to create more content than one consumes.  Reading books/periodicals, watching tv/movies, social media and the internet.  It's all consuming content.  How many opportunities does one have to create content? 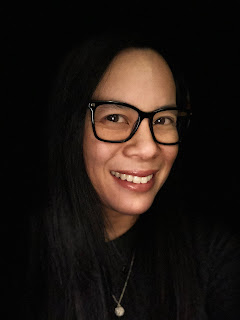 I look at this blog as my last 'real' attempt to create content.  Then, a couple of years ago, I started to cheat in this effort.  It was quicker and more instantly gratuitous to post in social media, so instead of taking the time to think through what I wanted to post, I'd just snap a photo and post it on Facebook. Yes, it's easy to argue that posting in Facebook is also creating content, but it's not the same.

Now, when I look back at my Facebook posts and my blog posts, I definitely get more enjoyment reading my blog posts than my Facebook posts.  Also, sharing my blog with the kids is a blast!  It tells a story.  And I realize that it's not as important to me to let others know 'what I'm up to lately'; rather it's more important that I have something that I can reflect on with my family years down the road.

So, in an effort to 'create content', I'm going to start creating content that is meaningful to me.  I know I stopped doing this because life got so busy.  But maybe, if I take time out from consuming content and I create content instead, I might just find some time.  Fingers crossed.
Posted by Yvette at 12:56 AM No comments: