One last post for 2009. Josh did his second round of skating lessons this Fall. This was his first time on "real" skates as he did his first lessons on BOB skates at the beginning of the year.

He did an awesome job! In the beginning, he couldn't even stand on his hockey skates. By the end of the session, he was tap-tap-tapping all by himself! Though he really seemed to catch on, I think he had a tough time. When I asked him if he wanted to do skating again, he said that he wanted to do it later. So, I think we'll take a break from skating until next Fall...

just squeaked this one in

I said I would do a Christmas post before the new year and I'm just squeaking this one in! What can I say?! The whole year, much less the holiday season, flew past us! I've had so many things I've wanted to post and no time (or no energy) to post them. So, I wanted to make sure I got my Christmas post up before I'm forced to declare blog bankruptcy!

We had a really nice Christmas this year - it was quiet and we stayed close to home. After Josh's birthday, we start to build momentum for the holiday season and I think Josh now understands when Christmas is coming. He loves the Christmas lights outside and he was pretty excited this year to help decorate the tree. He knows the whole advent calendar routine like the back of his hand - courtesy of a wonderful Playmobil calendar he got for his birthday this year.

Avery has no idea, of course. She's only 8 months old! But I think she enjoyed the festivities nonetheless. I'm still working on traditions for our family, though.

This year, Josh wanted to build a gingerbread house, so we bought a kit and put it together. Brian, our resident framer, put up the house. Josh said he wanted a house that looked like the picture on the box, so I started to decorate the house accordingly. Well, it turned out that it wasn't much fun for Josh to watch Mommy decorate the house, so at that point, I slathered on the icing and let Josh decorate the rest of the house. He loved it. He loved it everyday that he ate bits of it and once his favourite bits were gone, he lost interest. It was fun while it lasted though!

We did a whole "if you want that toy you have to ask Santa" routine, so Josh was pretty excited to see Santa. We visited Santa at the mall and Josh had no problem waiting the 20 or so minutes in line. He wasn't scared of Santa at all and went into a lengthy explanation of the airport toy he wanted that he had just seen at Toys'r'Us. The experienced Santa staff said to sit Avery on Santa's lap without letting her look at him. It worked well and we have a pretty good shot of the kids with Santa (not shown here).

The kids saw Santa again at my company's kid's Christmas party. This time, Avery saw Santa and she did not like what she saw (see below)! It was the standard reaction you would expect when you sit a baby on a strange man's lap.

We visited Bright Nights in Stanley Park twice over the holidays (and managed to forget our camera twice!). The first time, the train was sold out, so we decided to make the trip back there a second time with tickets bought online. It's a pretty spectacular display, even if you don't make it on the train. Josh loved the train ride, though, and wanted to go again after it was over. Maybe next year...

We had a wonderful time spending Christmas Eve and Christmas Day with the Van Dop side of the family this year. We were sad that Dad had to spend the holidays out of commission, but we visited him and tried to make the day as festive as possible.

We hope you and your family had a joyous and peaceful holiday and we wish you a fabulous 2010 - Merry Christmas and Happy New Year! 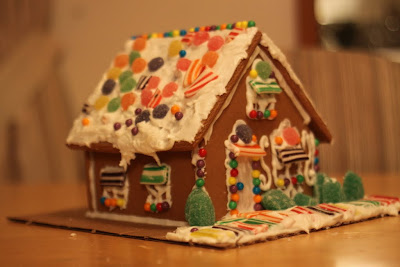 Our first attempt at building a gingerbread house 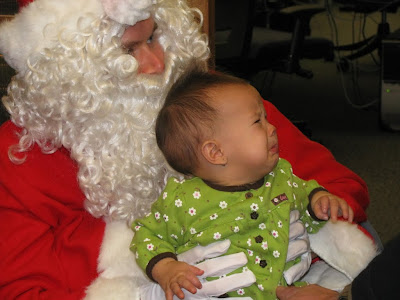 Who is this man and why am I sitting on his lap??!! 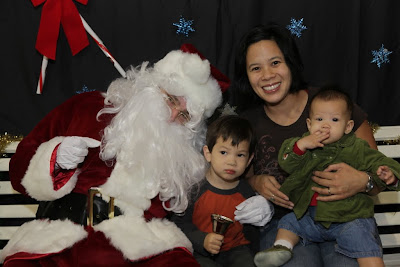 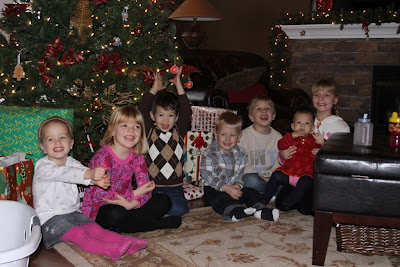 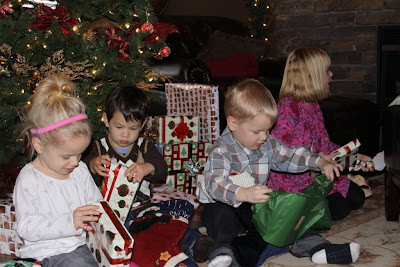 The 3-year-olds doing an awesome job of opening their presents! 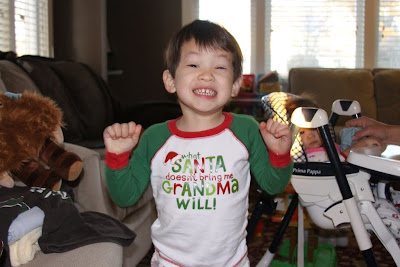 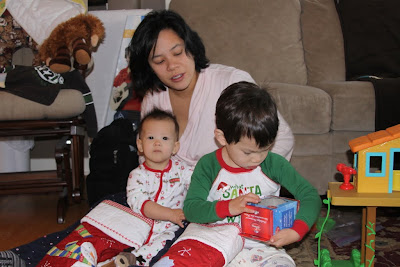 Opening our stockings together 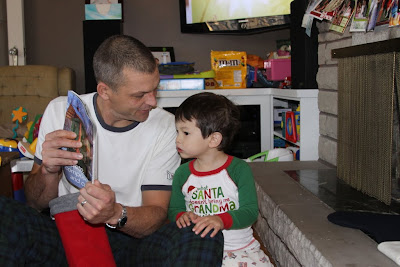 Please explain to me how that is a good present, Daddy... 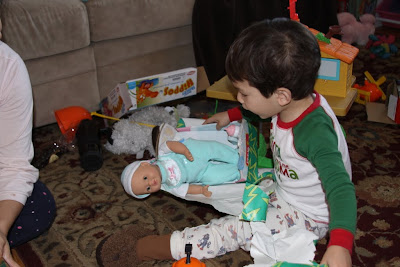 Josh said he really wanted a baby for Christmas, so we obliged. He named it "Baby Avery". 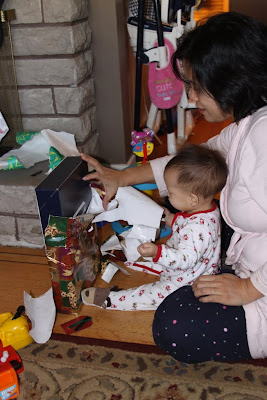 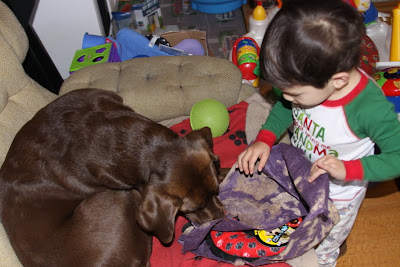 Even Nikita got in the action 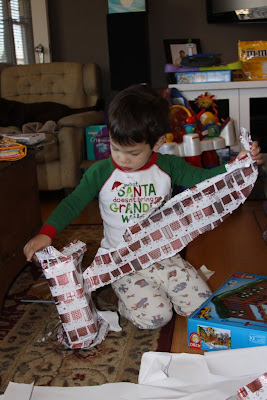 Josh really enjoyed the opening of presents part this year... 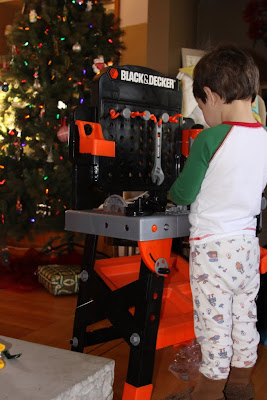 ...and he didn't mind the gifts inside that much either!

We got our Olympic tix delivered today. I'm surprised VANOC waited so long to send them out, but I guess they are trying their hardest to prevent scalping.

The tix are pretty cool, and pretty big - bigger than an iPod Touch, anyway! We have tix for preliminary men's hockey, curling and for the ski cross up at Cypress Mountain. Nothing too exciting, but at least we can say we took part in the Olympic experience.

BTW, my girlfriend who lives north of Whistler just listed her house for Olympic accommodation here. If you know anyone that is looking for accommodation for Whistler Olympic events, please send them the link. 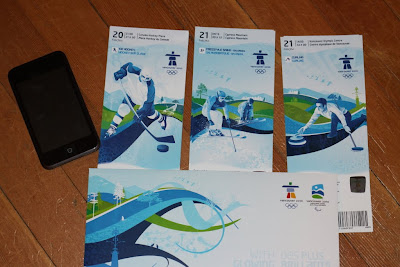 This post was originally called milestones. I started it in October when Avery turned 6-months old. I've been meaning to post this since then! Six months became 7months and then 7 became 8. So, here I am FINALLY posting this! Because there are so many pictures, I'm just throwing them all in at the end - they start from back in July when she was 3 1/2 months old until her bath in the sink at the beginning of December.

Anyway, Avery is 8 months old and SUCH a cutie. I haven't had my camera that takes movies since August, so I don't have any movies of Avery for the past 4 months. It is really unfortunate because she has been SO animated these last few months. I just got my camera back a couple of weeks ago and I shot the movie that I posted after the pictures. SO cute.

So, what are the milestones?! There have been so many! Avery has 2 teeth now, on the bottom. They came at about 6 months old and they are still her only 2 teeth. She started sitting up on her own at about 7 months. She can't crawl yet, but that is fine by us! In fact, it's harder now that she is sitting because she doesn't always want to be in the exersaucer or the jolly jumper. I think it's safer for her to be in either of those two because it's a layer of "protection" from Josh. When she's sitting on the floor by herself and Josh is running around, leaving bite-sized toys everywhere, I feel like Avery is so vulnerable to the "elements"!

Avery's first word was, you guessed it(!), "Mama"! However, she only says it when she is distressed in that very crying, whiny tone..."Ma ma ma ma ma...". She started that at about 7 months, too. I've been trying to teach her "mama", "dada" and "baba". Just a couple of weeks ago, she started to say "baba". Now, in addition to her squeals, she goes around saying "mama" and "baba" all the time.

I thought that because Avery was such a talker, she would be quite calm in the movement department. NOT! I guess we're just one of those rare, "lucky" parents who just have active children. Avery cannot sit still. She will not just sit on my lap. She likes to be standing on laps or, if we're standing and carrying her, she is constantly turning her body and leaning all over the place. She's just fidgety girl. Have you met her brother?!

Speaking of brother, Josh and Avery are great together. I'm having lots of fun watching the 2 of them these days. Josh always includes Avery in everything and he always wants to comfort her when she cries. She LOVES to watch him play and I think she gets some comfort out of him just being around. It's great to watch him try to make her laugh and hear her giggle because of him.

Josh also has his moments around Avery, too. He bit her couple of times. The first time, I think it was because he was going to put his finger in her mouth and I told him not to because she already had teeth and it would hurt. So, I think he decided to pre-empt her strike with one of his own!

Josh can also be quite rough with Avery, so she'll have to be a tough girl just to survive him! We are constantly having to remind him to be gentle with her but he soon forgets our warnings.

He also takes toys away from her all the time. I think he does that because he can! I'll be interested to see how things evolve once Avery is able to crawl and walk and stick up for herself. I'm sure she'll be taking his toys much more often and she'll able to voice her discontent with him. Ahhh, the joys of sibling rivalry... 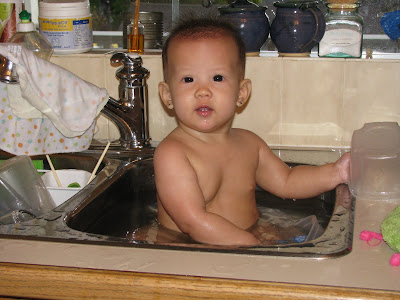 Someone once mentioned the term "email bankruptcy" to me and I thought it was very appropriate! I usually read all my email, but I'm not always very good about replying. So, I've decided (or this time of year, I guess I should say I've "resolved") that I am going to declare email bankruptcy as of January 1st, 2010. So, if you've sent me an email and I haven't replied by then, chances are I won't.

I will resolve to be better at replying to email in the new year, but I'm definitely not going to try to catch up anymore!
Posted by Yvette at 1:27 PM No comments:

a show of support

I do not profress to know, nor would I ever want to know, what it's like to be fighting a battle with cancer. My heart breaks everytime I hear of someone, and their loved ones, fighting this battle.

Each year, we always make a contribution in hopes that there will one day be a cure. In the meantime, I wanted to do one more little thing in hopes that my show of support may help just one person as they fight this horrible disease... 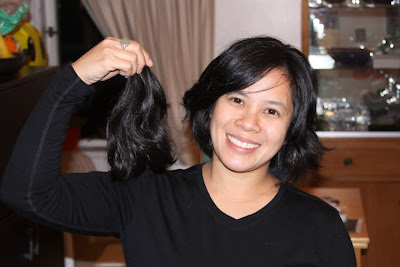