Josh's first time skiing
Originally uploaded by evelet
I FINALLY found out how to edit movies on my computer! So, here's some footage of Josh's first time on skis...
Posted by Yvette at 6:05 PM 2 comments:

Josh went skiing for the first time this past weekend. Woo! Hoo! He actually liked it alot! I was surprised. Despite missing his nap to attend the afternoon session, he did really well. He had his ski boots on for about 3.5 hours without once complaining and wanting them off! I guess I was expecting the worst and the day actually turned out really well.

We went to Seattle to visit Jon and Caroline. They said that they were planning to go skiing/riding up at Steven's Pass, so I thought it was a perfect opportunity to get Josh in his first ski school lesson. So, Jon, Caroline, Josh and I went up to Steven's Pass for an afternoon of skiing/riding and Brian and Aves hung out in Seattle for some father-daughter bonding.

As it turned out, Josh's lesson was from 1pm to 3pm - right at Josh's nap time. But we signed him up anyway and decided to give it a shot. He had a short half an hour nap on the drive up to Steven's Pass and we arrived at around 11:30am. It took the next hour and a half to get him all set up and ready to go! Who said that getting kid's into activities wasn't a big production?!

Some of the highlights of our big ski adventure were:

- Josh REFUSED to go skiing without goggles. I guess living in the Pacific Northwest makes us really sensitive to sunlight in the winter since we rarely see it! Anyway, it was a beautiful, sunny day and with the glare on the snow, Josh could barely open his eyes when he was outside without them watering like crazy! So, I had to go to the ski shop and buy him a pair of kidlet goggles.

- I expected owies and complaints when he put on his ski boots, but the equipment guy explained that they were like robot boots and I think that's what made Josh love them. No complaints about the boots - not even once!

- I was worried about the potty thing. Josh is potty trained, but the ski school requires that kids are "completely" potty trained. That means they can go to the washroom completely by themselves. Josh is mostly there, but I wasn't sure if he could go by himself in a public bathroom - especially if the toilet flushes automatically. Josh is deathly afraid of "toilets that flush by themsel-ves". It's the first question he asks anytime we go to a public bathroom. If it flushes by itself, he refuses to sit on it. I made sure that their toilets didn't flush automatically and it turned out that Josh had to go once during the lesson. His instructor, Lindsay, told me that when he came out he said he got some pee on his pants. Ugh. But I guess he wasn't wet enough to stop from skiing again!

- I stayed for the beginning of the lesson to make sure Josh was OK. There were just 2 kids in Josh's class and Lindsay seemed to have them both listening well. I saw her teach them to put on their skis and hold their poles. Then, they went on a small "walkabout" on relatively flat terrain. I overheard them looking for "crocodiles" and stuff. She was really great with them. Josh was shuffling along with his skis in no time!

- I had to leave right after that because I could tell he was getting whiny each time he looked at me. It's so true that our kids are whiniest when they are with us and are usually fine when we're not around! Lindsay said that Josh was a bit cranky at times (like falling down) but she could tell he was pretty tired and it was par for the course with 3-year-olds.

- I only really had an hour and a half of riding that afternoon while Josh was in his lesson. Really though, it was enough! I haven't gone riding in 2 years. Crazy. I've been riding for almost 15 years and it's kind of like riding a bike - you never forget. But your muscles do! I was able to do the runs no problem (we stayed on blues). It was actually quite easy, breezy. Not alot of work involved to just nicely carve a smooth ride down a blue run...then why were my legs freakin' burning when I got to the bottom of the run?! Aargh. I'm SO out of shape!

When I went to pick Josh up at 3pm, they were playing in a snow bank. Fun! Lindsay took us back to the ski school area and she showed me how Josh could walk up the "magic carpet" and then ski a straight line down the slight incline. It was amazing to watch him ski for the first time! I guess I couldn't have missed it since I was filming it and the straight line that he chose to ski was right towards me! I had to move out of the way to avoid him! Hahaha...Anyway, I couldn't include the video in the post because the file was too big, but I posted some photos of him in his kiddie skis. Needless to say, he's been asking to go back skiing already, so I guessing that he enjoyed it quite a bit. Now, I'm not sure if there is enough snow on the local mountains, but I'm hoping that we can go up one more time this year! 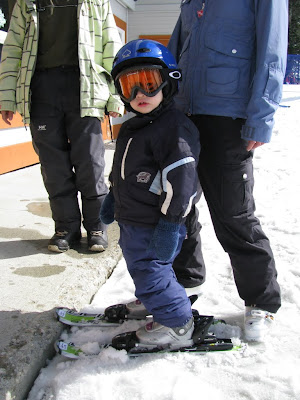 Joshie looking cool with Mom's goggles - he was fine as long as he had goggles on! 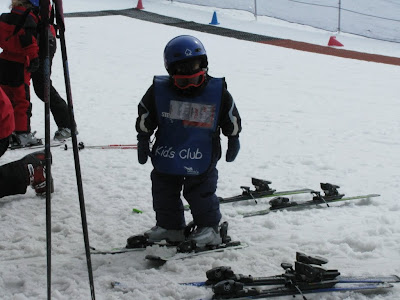 Checkin' out his gear

Getting used to holding the poles 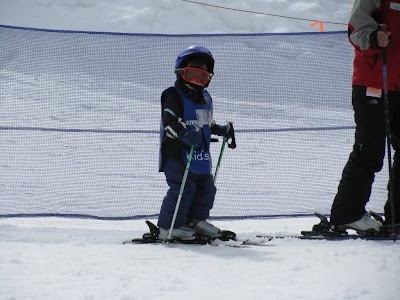 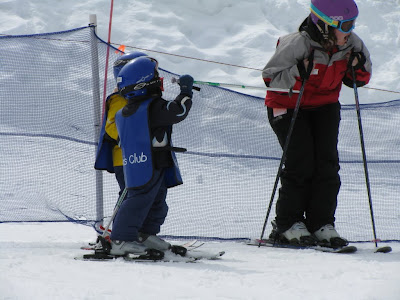 I see some crocodiles over there! 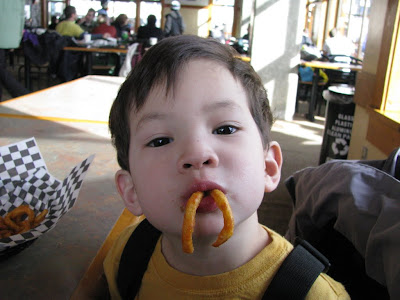 Josh gave Avery a nickname and it seems to have stuck! He started by calling her "Ave" out of the blue and now we just call her "Aves" (with a long A sound).

Anyway, the last post I did about her was in December. It's March now! So, I thought I would share some happenings on the eve of her 1st birthday. She is just over 11 months - I can't believe I'm going back to work in a month. My first day back is actually her birthday. How sad is that?!

I've been looking forward to going back to work this time around. It has been H-A-R-D staying at home taking care of 2 kids! It truly is twice the work. So, all I've been really thinking about is how nice it will be to have adult conversation and some "me" time.

Well, I think a couple of weeks ago, I started to realize what I was giving up. Ugh. I have bonded so well with the 2 kids this past year. It's been a struggle, but I look at the kids in the end and I feel so close to them. Whoever said that motherhood was a roller coaster ride, well, they must have been a mother, because it's the biggest roller coaster ride that I've ever been on. I've never felt so much love, happiness, guilt, anger and complete sadness about anything. So, I'm sure I'll be a bit of a basket case for the next few weeks - bear with me...

Now, onto Aves! Since December, she's gone from scooching to full fledged crawling. She's big into crawling and not really interested in walking yet. She will pull herself up to standing, but doesn't really have interest in cruising yet. This is all a new thing for me since Josh didn't really crawl for very long. Aves has mastered the art of crawling. I don't know if she learned this from Nikita, but she has discovered that if she wants to bring a toy with her, she can put it in her mouth and crawl around. And she does love to pull herself up on things. Namely me. Between her wanting to be held by me and Josh wanting to get in her way from getting held by me, I feel like a jungle gym most days!

Talking is coming along too. If I say "all done", I swear she says something that sounds very much the same. When I say bye-bye, she'll say "ba ba". I'm just amazed at all the sounds she makes and how much she understands and can communicate already. She is definitely going to be talker! On second thought, I remember Josh barely ever talked through the baby and toddler years and I thought he was going to be the strong, silent type. At almost 3.5 years, I can't get him to shut up most times!

Yesterday, Aves started to shake her head "no". Too funny. We have a kid's CD called Dog Train and there is a song on it that has the lyrics "No, no, no, I don't wanna, I don't wanna...". When I sing the song to her, she shakes her head and when we laugh, she laughs back.

She has 5 teeth now and they are chompers! I think, unfortunately, that she is going to be blessed with her mom's 2 front horse teeth! But it doesn't seem to matter. She is just the cutest little thing ever and her smile is infectious.

Here are a couple of pics over the past 3 months. I'll be posting more on her birthday so I'm only posting a few really good ones right now... 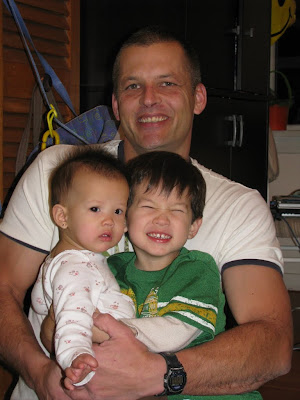 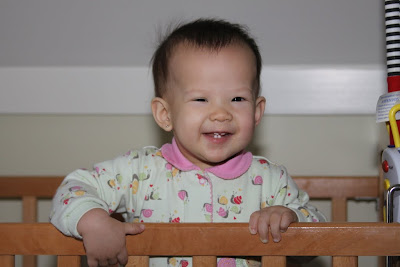 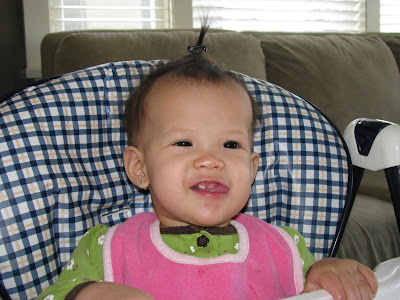 Mommy, what are you doing to my itty bitty hair?! 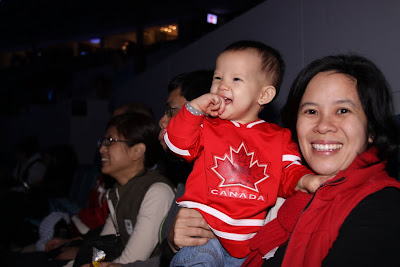 OK, I'm still trying to sort through my TONS of photos from our Olympic experience. It was, in a word, a blast! The energy and patriotism here was infectious. We went downtown a couple of times just to see what the hype was all about and we found that we wanted to keep going downtown to be a part of it!

It's hard to describe - I think you just had to be part of it. Some have said it was like celebrating Canada Day everyday for 2 weeks. I was born and raised in Canada and have never celebrated a Canada Day like that! The closest thing I can remember where we celebrated like that was being on Yonge Street when the Blue Jays won the World Series for the first time in 1992.

So, I'll have to post my Olympic diary another time, but for now, here are the cutest kids EVER! They're so cute, I'm surprised that Avery didn't make the Jumbotron when we took her with us to the Germany vs. Belarus hockey game dressed like that! 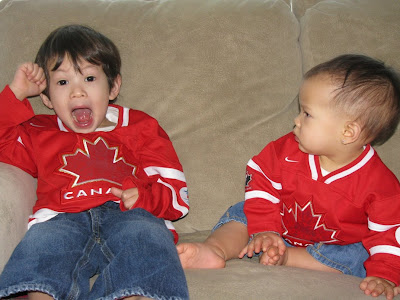