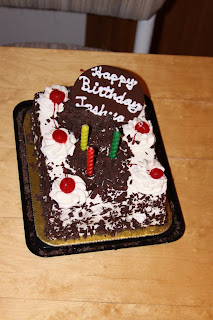 I had a couple of posts written before this one, but I had to make sure I got this one up soon! Well, I can say that this past year with a 2-year-old has been quite an adventure, but we made it!

Two is an amazing age. When I think that Josh has only been around for 24 to 36 months, I can't believe how much he's changed in that time! Last November, he was a toddler turning into a little kid. Now, he's a little kid saying that he's a "big kid". And believe me, that's not all he's saying! Josh thrived on communication this past year. When he first started talking, I wrote down all the funny little "Joshism's" that he used to say. Well, I can't keep up anymore! He loves to talk about everything! Most times we understand him, but sometimes, it can be very confusing and I feel bad when he's trying to say something to me and I don't understand! His pronounciation has really improved within the past year, though. He used to pronounce "r" as "w" and, most recently, his "l" is no longer "y".

I could go on and on with the list of changes I've seen in Josh over the past year, but here are the highlights:
- He can put on his shoes and take them off (velcro kind)
- He can undress and he can dress himself except for putting on pants
- Brushing teeth was a struggle last year, but now he will brush his bottom teeth well on his own and he will let us do his top teeth
- Mealtimes are still a stuggle getting him to sit down for the whole meal, but he sits in a big chair and he eats pretty much all the same stuff we eat
- He can draw lines and circles
- He loves to hang, climb, jump and he can walk the length of the balance beam, assisted, but without falling
- He learned to skate on BOB skates last January and now he's learning to skate on real skates
- He's in swim classes without us and he's progressing well. He's not doing things on his own yet, but he will float on his back, go underwater and blow bubbles and all the stuff the instructor teaches them.
- He goes to a "stomp" class without us and he loves dancing and hip hop
- He's not afraid to try new activities - he's been on waterslides, roller coasters and he loves it all
- He's starting to "socialize" with other kids his age. They can play together and they even talk to each other (and boss each other around!).
- He can be very protective and endearing with Avery these days. When she was an infant, he wasn't particularly interested in her, but now that she is 7 months old and more interactive, he loves to help me change her diaper and he always goes to her and tries to soothe her when she's crying. It's alot of fun watching them interact together!
- I think he understands the concept of family. Everytime he talks about us doing something as a group, he says, "Daddy, Mommy, Joshie, baby Avery and 'Kita". It's very cool to hear.

Of course, we have to take the bad with the good and this is where the "we made it" part comes in! Josh DEFINITELY went throught the terrible 2's. I'm so envious of the parents who say they never really had trouble with their child at 2!

Josh started out the 2's just by being very active! He always wanted to run around and wasn't afraid to be away from us, so we had to chase him down alot. At 2, he was still too young to understand "listening to us" but now, he is really good about "staying close" when we ask him to.

I think it helped that he developed the emotion of fear next. Last January, he started to say he was afraid of things and he actually started filtering what he watched on tv. Shows that he really enjoyed before (like Cars movie and Dora) all of a sudden had scary characters like Frank the combine and witches. He also started having bad dreams and waking up in the middle of the night because of it! All of this, I think, slowed him down a little and made him cautious in certain environments.

At around 2.5 years old, the REAL terrible 2's started. Josh started with hitting and pushing. Whenever he would get excited, he would hit or push. No amount of telling him it was bad could stop him! That phase has mostly passed but it evolved into growling, screaming, spitting and stomping. Honestly, I feel like a broken record when I tell him to stop doing something! Of course, this eventually leads to a time out, which I'm not sure is effective with Josh, but it's what we can do to calm him down, get him focused and calm ourselves down! And to top it all off, now I see a temper started to appear. Whenever Josh gets angry or frustrated, he wants to yell, hit and cry (hmmm...wonder where he gets that from?!).

I know that a switch will not automatically go off and he will be an angel when he turns 3, but I see more and more he is starting to understand when we explain things to him. Adn believe me, we are learning just as much as Josh is when it comes to parenting and dealing with a pre-schooler!

I could go on and on about all the experiences, good and bad, that we've been through with Josh this past year, but I better stop here! As hard as it's been dealing with the terrible 2's, I would not have changed a thing about the past year. I am still astounded by Josh everyday. I learn so much from him and he brings such joy to my heart. I find that many days, we'll just be playing I find that out of the blue, I have to tell him that I love him.

Happy 3rd Birthday, Joshie. I can't believe you're growing up so fast! We love you and we're so proud of you. 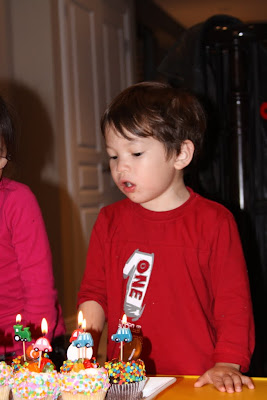 Josh and his birthday cupcakes, celebrating in Toronto last week 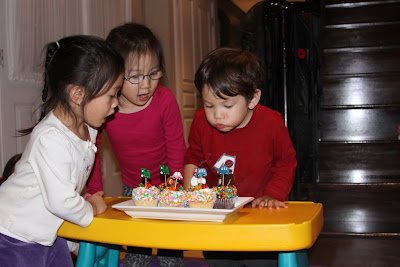 Josh got to celebrate with Big H and Little H while in Toronto (we missed the Sugi cousins!) 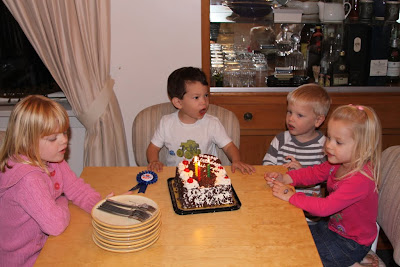 And then Josh got celebrate with his Van Dop cousins on his actual birthday!
Posted by Yvette at 2:50 PM

what is stomp class?

what a wonderful and an honest recollection of this past year with josh...a most enjoyable read for all of us facebook friends...thank you for sharing yvette...i'm glad you've all survived josh being 2!!!

Hi Yvette, really enjoyed reading this as its always good to hear about how someone elses child is progressing. Aaron turned 3 in july so is about 4 months older than Josh. He's quite different to Josh and its interesting reading about how they differ. As for the screaming and yelling he does, i read that at this age kids aren't always able to verbally express an emotion so will sometimes do this. If you judge the situation and explaing to him what emotion he may be feeling, as time passes, he will stop the yelling and tell you how he feels. Its slowly beginning to work with Aaron and when they all of a sudden tell you, it takes you back a bit. Good luck :) k.

OMG all I could do when I was 2 was say garage door, or duadu as I pronounced it.