I'm not a big Hallowe'en person - I can't even recall the last time I dressed up! Wait a minute - I think it was in 1997 and I only did it because my roommate, Val, forced me to!

I remember, though, that I enjoyed Hallowe'en when I was a little kid. It was really the trick-or-treating that I liked and, let's face it, it was mostly about the candy. So, I want my kids to be able to experience Hallowe'en and though I don't decorate the house or anything, I'm hoping that there will be little things that make the day special for them.

I asked Josh what he wanted to dress up as for Hallowe'en this year. Though I don't think he understood the concept, he said he wanted to be Buzz Lightyear (we were in the Disney store, by the way). Unfortunately, there were no more Buzz Lightyear costumes in his size, so I just got him a Lightning McQueen costume from the movie Cars. It's kind of hard to make a costume for characters in a movie when all the characters are cars, but Disney made it a sort of "pit crew" kind of costume. Josh wasn't too excited about it because he had his heart set on Buzz Lightyear, but I got it anyway for lack of a better idea.

Anyway, we were invited to Josh's cousins house for Hallowe'en. I knew Josh would LOVE going trick-or-treating with his cousins, Brooke and Luke, so I figured this might make Hallowe'en a nice memorable event for him. Unfortunately, the most memorable parts for Josh were the Shrek monster that answered one of the doors and the loud fireworks that made him cover his ears and ask to be carried!

We arrived at the Shrek house about a dozen houses into our trick-or-treating. Up until that point, the kids were having a GREAT time! The 3 of them were going up to the houses all by themselves, ringing the doorbell or knocking and saying "trick or treat". I had to keep reminding Josh not to reach into the candy bowl to grab the treats; he was suppose to wait until it was given to him. I don't think he really ever grasped that concept, though!

At the Shrek house, a lady opened the door and the 3 kids said "trick or treat". Well, standing behind the lady, was a girl wearing a Shrek mask. She wasn't doing anything. Just standing there and staring at them. The 3 kids just stared back at the mask and then they started stepping backwards away from the door! They managed to stay long enough to get their candy, but Josh hightailed it so fast after that he almost fell down the stairs! After they came back down, Josh and Luke wanted to go home. When we said we were going to go to a few more houses, they insisted on holding their mommy's hands. And we had to walk up to every door with them after that! Josh kept saying he "did not like the mask" the rest of the night. All I could think was that he was going to have nightmares that night!

I think Josh's favourite part of Hallowe'en was the pumpkins. He's been talking non-stop about pumpkins since Nana bought him one that he painted. When they started appearing on people's doorsteps, he wanted to go up to every doorstep and look at them. Maybe we will carve a couple of pumpkins next year and hope that he'll focus on that and not the scary mask or the fireworks!

Here are some photo's that we took of the kids before they headed out for their trick-or-treating adventure... 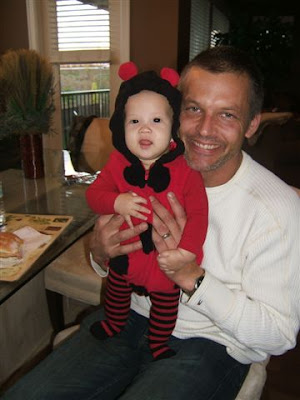 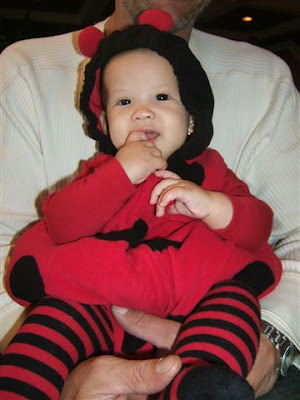 Unfortunately, she wore her costume for all of 15 minutes while we took these photos. Then she went for a nap! 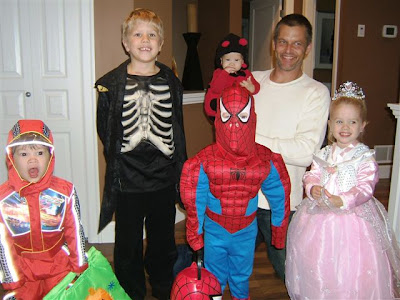 Josh as Lightning McQueen, Cole as a pirate, Luke as Spiderman, Avery as a lady bug, Brian as himself and Brooke as a princess 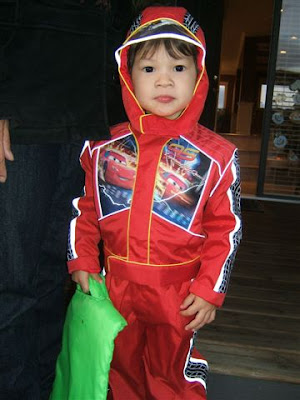 Josh loved his Lightning McQueen costume after he saw what he looked like with it on! 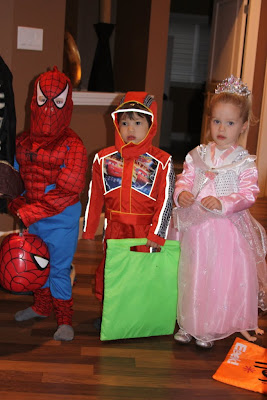 The 3 cousins ready to head out trick-or-treating. 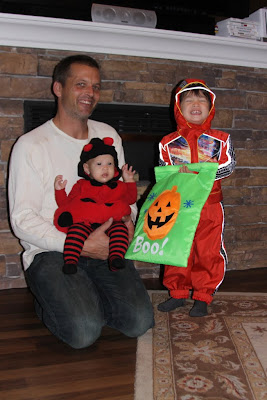 There are, it turns out, scary things on Halloween, even if you can't necessarily predict which things will be scary, like a girl in a Shrek mask. Chances are next year it won't be so freaky for him.