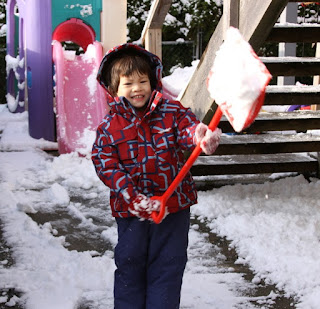 Sometimes it feels like Vancouver snow is becoming a more frequent occurrence.  However, it is still novelty enough that it makes me want to blog when we have our first snowfall of the year.

I love snow, so I think snow in Vancouver is exciting.  Especially now with kids - they are so fascinated by snow!  We went to bed last night to heavy snowfall and woke up this morning to a few inches of snow on the ground.  When Josh looked outside in the morning, he was thrilled to see the snow and wanted to go outside right away.

We managed to hold him off until after breakfast, but immediately after, we dug up his snowsuit, boots and Vancouver 2010 red mittens.  We couldn't get the gear on fast enough!  Brian went out with him and together, they shoveled the bit of snow on our sidewalk (I think Brian was using it as a training session for later on in the season!).  After that, Josh made his first snow angel - and loved it!  I think he just might be a snow person, just like his mommy.

I don't think Aves is quite ready for the snow yet.  Mostly because I'm not ready yet with snow gear for her!  We just hung out inside while Josh and Bri were outside.  However, when it eventually came time to venture out for Elijah's birthday party, I fought Avery to get her coat and boots on (see what I mean about her not being ready for snow?!).  In the end she looked SO cute I just had to get a picture (and I'm not sure how Bri got her to pose this way!). 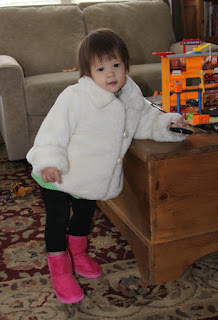 The Disney princess fur coat was a gift from the Moffats and I LOVE it!  Don't know that you would ever catch me wearing a white faux-fur coat, but on a toddler - SO adorable!  Same as the UGG-style boots (courtesy of Maddy).  I think of them as UGH boots - you wouldn't catch me dead wearing them.  But on Aves, they were the cutest things ever!  Now if only I could figure out a way to get the coat and boots on her that didn't involve tears, chasing and just general drama and hysterics...
Posted by Yvette at 10:01 PM

Uggies! we wear them at home in Oz.

I made my first snow angel yesterday, it's so much fun lying in the snow.

I'm glad you love it because it will be Sophia's next winter!