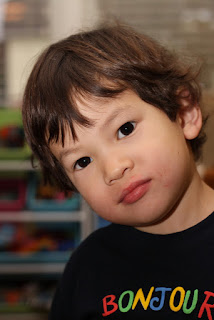 I'm SO behind on posting, but I had to jump ahead with this one!

It was officially Josh's 4th birthday today, but we celebrated yesterday.  Rather than confuse the issue and celebrate on both days, we just made yesterday his unofficial birthday.

We celebrated Josh's birthday this year by inviting family and a few friends for a playdate at Crash Crawly's.  In his own words, Josh "loved my birthday".  I love hearing him say stuff like that.  He seemed to have so much fun and we love it when he gets his energy release!

Josh has changed amazingly in the past year.  We've had our share of challenges and moments of brilliance.  Just a year ago, Josh was still in diapers, sleeping in a crib and in swimming lessons with Dad.  I realized recently that soon after he turned 3, we started potty training AND we moved him out of his crib and into a twin bed at the same time!  It never seemed to phase him though!

Also in this past year, Josh reached a milestone where he no longer goes into classes with us.  He is now on his own!  It seems to be difficult keeping his focus in lessons - but his biggest success has been swimming.  He loves to swim and is now working on his front floats and back floats unassisted.  He has also tried gymnastics and trampoline - he loves trampoline but not so much the gymnastics part.  And he had a ski lesson last Spring which he also loved.  He does his share of music and hip hop classes at the Kids in Motion studio, which he always likes too.

Josh is such a social child that I never worry about him being in his classes without me.  It makes me sad sometimes when I see that my child doesn't seem to depend on me that way, but I try to tell myself that the grass is always greener on the other side.  I'm sure that having a shy child who clings to you also has it's share of challenges.

Josh started pre-school this past year.  We started him at 2 days per week in the Spring and now he goes for a couple of hours 3 days per week.  Just in the past few weeks, we have seen a big change in his desire to learn.  His big thing these days is counting.  He loves to count everything.  I'm just amazed when we're out and about and I see him counting something out of the blue.  He gets to 13 everytime, but then goes to 17.  I'm not sure where 14, 15, and 16 went, but we're working on it!

He doesn't seem as interested in letters as much as numbers, but he always wants to know how words are written.  When we write a word, he tries to sound it out by tracing the letters with his fingers.  But he doesn't seem to be interested in relating letters to their individual sounds!  Weird!

Josh has been quite talkative since he learned how to talk and, these days, the questions are non-stop.  The "why?" question drives us nuts sometimes, but we always try to give him an answer.  He has started story-telling as well!  His stories crack me up and often don't make sense, but his imagination is great!

Behaviourially, Josh has given us MANY challenges.  I think he went from terrible 2's to even more terrible 3's!  When he turned 3, he seemed to be reaching his stride with our "new" family with Aves in it.  Then, we threw him another loop by me going back to work and bringing Tess into our home to take care of the kids.

We think (and hope!) that the combination of terrible 3's, adjusting to this new family with Tess in it and my not being around 24/7 has made him really push and test us.  Well, it's been working!  He has definitely been pushing and testing!  Some days, we find it so challenging trying to deal with his yelling, hitting and talking back.  Other days, he is this brilliant, angelic child.  We can't keep up!

I can truly say as amazing as it is to see Josh changing and growing, it is just as difficult for us to change and grow as parents.  Not only is Josh learning new things from week to week, but he is teaching us new things, too.  It is truly humbling to have a 4-year-old teaching an adult some life lessons about patience and disciplining!

But at the end of the day, when Josh and I are sitting on his bed, finishing a couple of stories at bedtime, he will kiss me on my lips, each cheek, each eyelid and several spots around my face.  Then, Josh will say to me, "Mommy, your face is so big that I have lots of spots to kiss!".  It's at that moment that I know why I love being a parent. 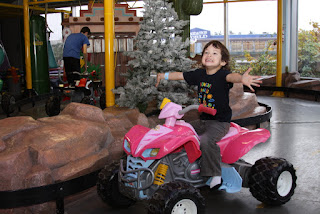 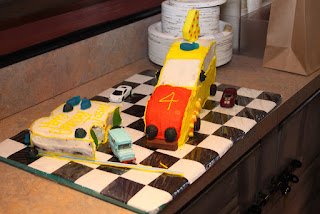 Josh's birthday cake, courtesy of Erin, was made to very specific
colour and candy detail requests by Josh! 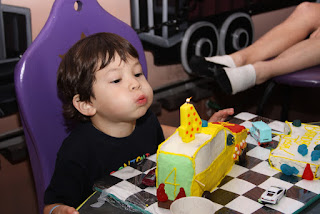 Blowing out the birthday candle 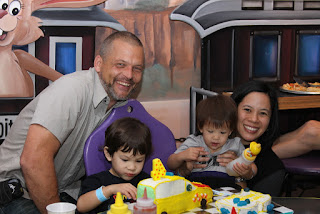 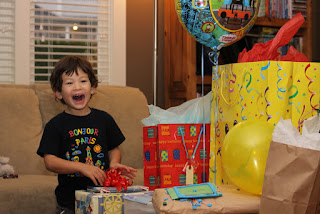 Back home and after a nap, it was present-opening time!
Posted by Yvette at 11:04 PM

Awesome, thanks Yvette. And just so you know, I recognize everything you wrote about daily dealings with your Josh in our own Josh. And yes, the kisses, hugs, crazy stories and energy (even the why?s) make it all worth it at the end of the day :) Love to you all from us - and congrats on being a mom for 4 years!!!!

Happy Birthday Joshie!! Love you lots and lots and can't wait to see your happy and SILLY face at Christmas:) X0X0x0x0x0x0x0x0x0...hit, hit♥

awesome update Yvette. Your 'little' boy is growing up so fast!

Awe-this is so honest and beautiful Yvette. He is such a cutie and growing so fast since I saw him.

such a lovely post - joshie is a brilliant little kid, and we love watching him grow up. you guys are doing a fantastic job!

Just love to read your posts, Vette. They are so beautifully and honestly written. Yes, Joshie's birthday was awesome....everyone--adults and children alike-- had a great time celebrating with Joshie and watching the joy that is Josh! We love you, little man! And the rest of your family, too, of course!! Love, Nana (Mom)