camping, glamping or something in between

We didn't go "glamping" in it's truest form, but we definitely did not go camping either! I guess we did what is known as "RV'ing". During the Victoria Day long weekend, we went on the inaugural camping trip for our trailer and, in a word, it was fabulous! Mind you, we're coming from a 1964 tent trailer, so our new 28-foot trailer seemed a bit extreme. But, believe it or not, in the RV world, our trailer is "entry level"!

In any case, we had a fun-filled, luxurious camping trip. We decided for the inaugural trip, we would keep things simple and make sure we had all the amenities. So, we headed across the border to the KOA in Burlington.

Firstly, I have to say that I can't believe we waited so long to get a Nexus pass! After the long weekend, the news reported that border line-ups were not as long as they've been in the past. However, the line going south was at least a couple of hours on Friday afternoon and about an hour going north on Monday afternoon. That is still 3 hours of line-ups that we avoided with our Nexus card. Furthermore, we did not have to scan the radio stations to listen for border wait times and schedule our trip around the border. We simply went when we wanted to!

Anyway, back to the trip - we arrived at the campground early Friday afternoon and immediately set up. It was so quick and painless that Brian and I were actually sitting at the picnic table asking each other, "That's it?!". It was really THAT easy.

The campground had a park, an indoor pool and a great off leash pet area for Nikita to run. Josh had a blast and even Avery loved to explore the gravel and grass area at the foot of our trailer (she's our resident gravel eater!). And, surprisingly ideal, there was a "camping superstore" in Burlington where we went on Saturday morning to finish stocking up the trailer. When do I EVER get to go shopping on a camping trip?!

We had planned to do a couple of things, like take a ferry trip to the San Juan Islands, but the weather didn't really co-operate that weekend so we mostly hung out at the campground. The park, the pool and taking Nikita for walks proved to be more than enough entertainment for the kids. Josh especially liked the proximity of the other campsites. He felt very comfortable going up to other campsites, introducing himself and asking what people were doing! He made friends with a couple of kids at the park and managed to stay out of trouble for the most part.

The kids slept great in the trailer, too! We had to make strange sleeping quarters because I was worried that putting the 2 kids in the same space, they would disturb each other. So, Avery slept in her playpen in the front of the trailer and Josh slept in the top bunk at the back of the trailer and they were both fine. On Sunday, they were both so tired out by naptime that they both had 3 hour naps through the afternoon! It's true what they say about the fresh air...

On our last day there, we managed to make a visit to Lang's Horse and Pony Farm. Our original intent was to get Josh on a pony ride. At the Queensborough Fall Fair last year, we asked Josh if he wanted to go on a pony ride and he said no because they were "stinky". We asked him this time and he said yes. When we got there, Josh gravitated to the horses. We kept pushing the ponies, but he insisted he wanted to ride a horse. I totally thought when he got on top of the horse he would freak out and want off. No such luck. So instead of getting a pony ride, Josh got a horseback ride!

We didn't get many pictures of the weekend, but here are some that we did get... 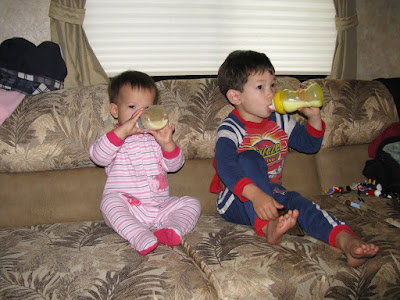 Bedtime milk on the couch in the trailer 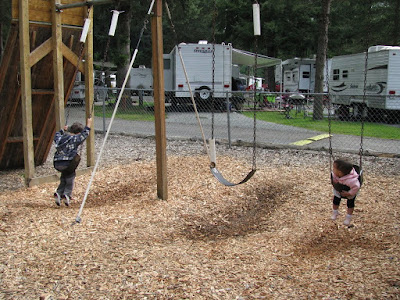 Swinging in the park 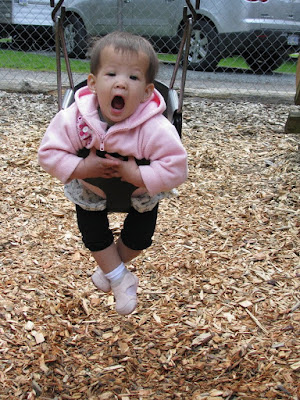 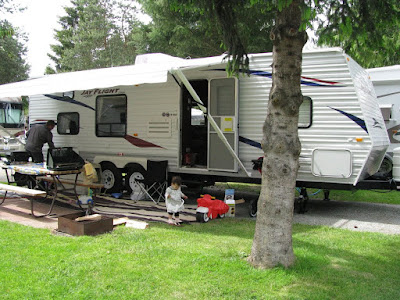 Our set-up, complete with Aves exploring 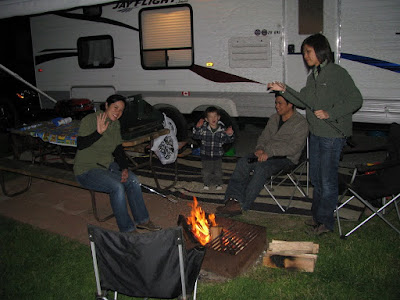 Roasting marshmallows by the campfire - Josh was actually quite afraid of the campfire and preferred the raw 'mallows. Jon and Caroline came up from Seattle for a day visit. We couldn't believe that Caroline has never roasted marshmallows over a campfire before! 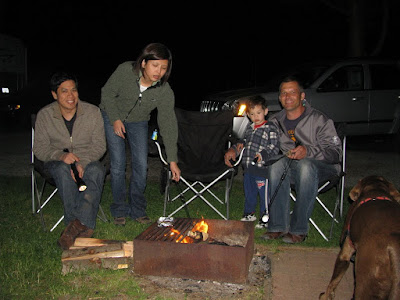 Caroline tries to perfect the marshmallow roast and even makes some smores! 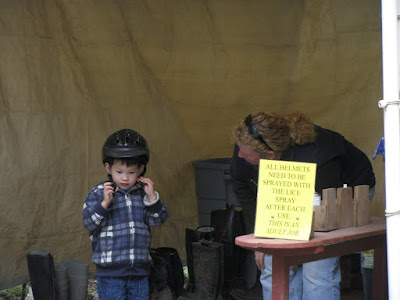 Josh puts on a helmet to prepare for his horseback ride (nice sign!) 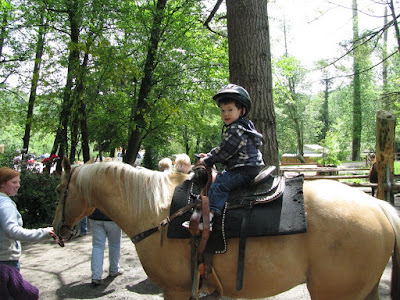 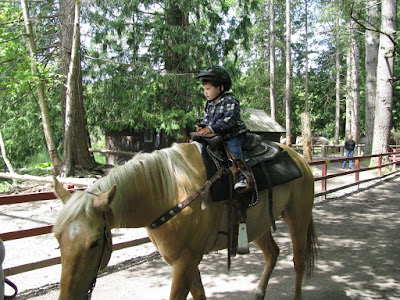 He looks so small when he's up so high! 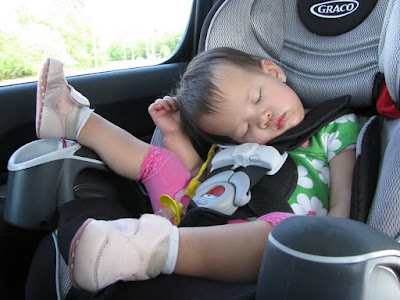 How toddlers sleep on the trip home from a camping weekend 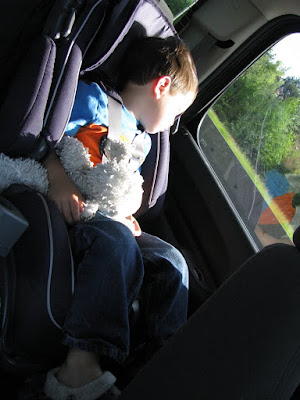 How pre-schoolers sleep on the trip home from a camping weekend
Posted by Yvette at 10:39 PM

Memory making moments...how special is that? Looks like you had a fabulous time; brings back fond memories of our 'camping' days. Isn't it wonderful how kids just love the outdoors; hope you'll have many more great camping trips.

Love it! Looks like a great time was had by all:)

That's pretty glampy from my perspective. Then again, we gave up on camping entirely around 2004 after a nightmarish experience with the two kids in a tent; we bailed out on that campground and booked a beachfront four-star hotel instead. As a bonus, they had firepits on the beach so we could roast marshmallows, have the campfire, and then head back to the luxury suite to sleep. Works for us just fine, so we went back for two more years after that. :)