I've been debating this for about a month now. I've asked countless moms their opinion on the matter and I finally decided that, like many things in life, I'm never going to be ready to do it. So, on a whim, Caroline and I were in Metrotown yesterday and I decided to pop into Claire's and get Avery's ears pierced.

I think it was meant to be, because the lady I talked to in Claire's was the manager. She explained the procedure and she said she had done MANY babies. She didn't try to reassure me that it would go smoothly but, strangely enough, I felt better about it after talking to her.

In the end, there were 2 ladies that simultaneously pierced both of Avery's ears. She sat in my lap and I had to hold her hands and her head. About a second after the piercing, she SCREAMED. But the crying was all over in a few seconds. She did great - better than her immunization shots, actually.

It's still been less than 24 hours, but all is going well. She rubbed her head against her mattress during one of her naps yesterday and she lost a backing. I think it irritated her ear when I put it back on because she was pretty cranky yesterday evening. But she slept well last night and her ears look okay.

She looks super cute with these huge stones in her ears! We have to keep these in for 8 weeks before we can change them but I'll be surprised if anyone asks me how old "he" is anymore! (Note: the darkness on the ear on the right is the purple marker they used to mark the holes.) 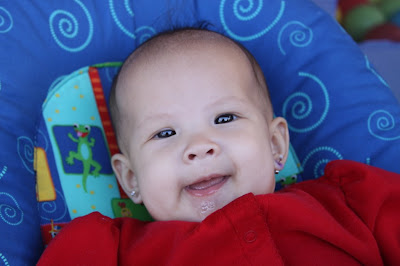 I did the the same thing with my girls. I got tired of people asking if they were a boy or a girl even when they were dressed all in pink.

so pretty! In my country, all baby girls get their ears pierced in their first few months of life; moms' don't even think about it I guess, its just the way it is! I am glad my mom did it for me then, I am too chicken now to get piercings :-)

Whew! I've been thinking about it for Charlotte, but think I'm going the route my mom used on me - not going to get it done until she asks for it. :) Super cute though, I love the look on babies.

She looks adorable!! I get tired of the boy/girl question too, especially when people say "three boys - you must have wanted a girl!"

It looks adorable....luv xoxoxo from Nana.

While it may work to help identify girls, lots of boys get ears pierced too. Maybe not as often so young, though.

I waited till I was 21, personally.

I had my ears pierced as a child, too, and still people asked my Mom if I was a pirate!