After our failed attempt to see the Blue Angels at Seafair during the August Long Weekend, we decided to make the trek out to Abbotsford to catch the Air Show there.

Oddly enough, in Brian's 40 or so years living in the Lower Mainland, he has never gone to the Abbotsford Air Show. He has gone to see the air part of the show from somewhere off the grounds, but he has never paid to go in and see all there is to see.

Well, now that we've gone once, I think I'll wait a few more years before we attempt to bring the kids again. In a word, the air show was "LOUD". We came prepared - we had ear muffs for Josh, and ear plugs for Avery, but even with the ear muffs, the fighter jets were still REALLY loud when they flew right over our heads and then fired up the thrusters (is that what they're even called?!) to fly straight up, right in front of us! Maybe the noise was amplified because of the cloud cover and possibly the jets flying lower because of it - all I know was that it only took one loud scare for Josh to completely lose interest in what was going on in the sky.

And with Avery, it was an exercise for me in how to insert earplugs into an infant's ears! I carried her in the ergo carrier the whole time and everytime she rubbed her head against my chest, her earplugs would fall out. Not fun. The air show's Web-site warns that the show may not be suitable for infants, so we can't say that we weren't warned. But we tried, and now we know!

Other than being extremely loud, Josh (and Brian) really enjoyed seeing the displays around the grounds. Josh got to sit inside police cars, trucks, fighter planes and army vehicles. He LOVED that. And before he lost interest in the actual air show, he quite enjoyed the smaller planes that trailed colourful smoke and the skydiving show, too! So, it wasn't a complete loss.

But, back to my original reason for wanting to see the show - I wanted Josh to see the Snowbirds perform. Unfortunately, they save the best for last and the Snowbirds weren't scheduled to fly until 4:45pm. Josh was already getting really tired at 3:00pm, and having experienced the noise factor a couple of times, we decided we didn't need to wait around for the Snowbirds.

So, we tried twice this summer to see some aerial acrobatics and haven't seen it yet. Hopefully, I'll still feel like seeing them next summer - only we'll take a cue from Brian's childhood and watch the show from a distance! 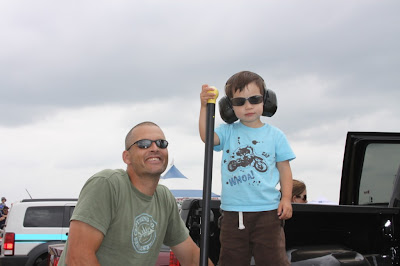 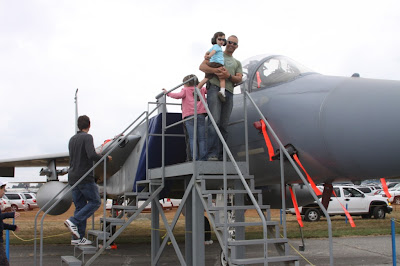 Checking out some planes with Daddy 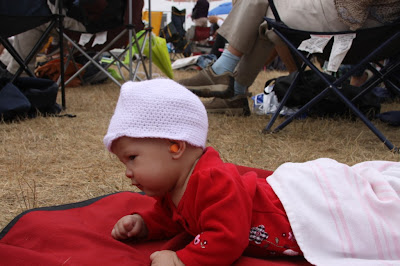 Avery's air show was happening on the ground! 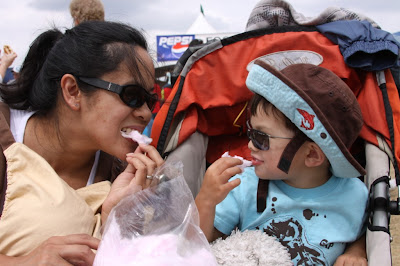 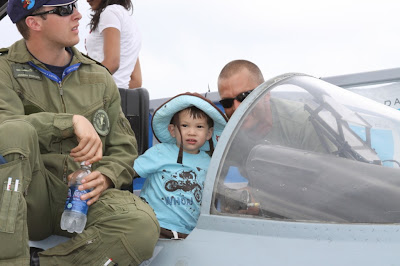 Do you think I can take this for a ride while he's not looking?! 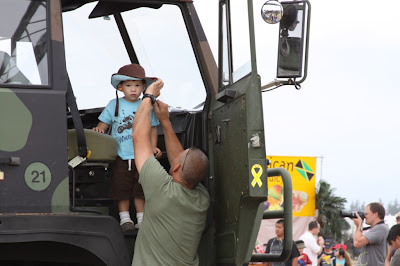 Daddy, I really like this super cool army tow truck, but I like my ear plugs even more!