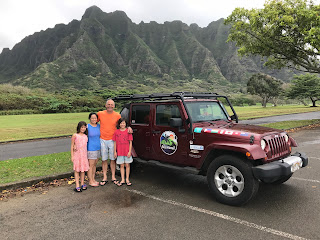 I was going to try to do our Oahu trip in one post, but we had so many good adventures, that one post wouldn't have done it justice.

One of the first things we did on Oahu was take a tour of the island.  Maybe I'm getting old, but I'm into tours these days.  All the tours we've done lately have given us insights into the places we've visited that we wouldn't have gotten just by going on our own (and some of the places we wouldn't have even known to go on our own!).  And, honestly, the kids love them!

Now, I'm not talking about a run of the mill bus tour.  We've been doing more 'fun' tours that cater to things we want to do.  This time around, we hooked up with http://therealhawaiitours.com.  They offered a jeep tour of the island and since the jeep only fits 4, it was a private tour!

Our tour guide, Dan, took us around the island and showed us things on and off the beaten path.  In a word, it was amazing!  We were engaged the entire time.  I can't really quantify what made it so great, but I think that was part of it.  It felt so much like a 1:1 tour of the island that sharing our highlights wouldn't mean as much to others.  It was just all the tidbits of information that we gathered along the way that made it so interesting for us.

Some of the particularly noteworthy discussions where:
- the Hawaiian language
- what it was like being on the island during the missile alert
- 400 skulls!
- shrimp trucks along the north shore
- Oahu vs. Maui
- all the movie locations along the way!
- chinaman's hat
- tako diving
- Hawaiian fruit and the economy

There were too many photos from the tour to post them all here, but here's a link to the album: https://photos.app.goo.gl/bJFO0oAfz0f7o0h73