how many days until my 7th birthday?

Josh asked me this today. His birthday was on Thursday.

Usually, I try to do the kid’s birthday posts on their birthday. I’m 3 days late this year. My excuses are:
So, it’s been a crazy few days. But enough about me! This is about Josh…

It’s been quite a year and you’ll have to forgive me for mixing 3 topics in one post - start of school, Hallowe’en and birthday.

Josh has had ALOT of change in the past 3 months, never mind the past year! He started EFI (early french immersion) Kindergarten this September. We are now parents of a school-aged child. It has certainly added another dimension to parenting!

Josh is likely the oldest child in his class, since we held him back from entering Kindergarten last year, but I’m certain we made the right decision. I’m seeing him grow by leaps and bounds, but he still has had his challenges. Despite the challenges, it seems that his maturity in understanding situations and being able to interpret his actions are making it easier for Mme. A and Mme. S to help him. So, it’s definitely helped that he’s a year older. We have been able to work together to continue to help Josh thrive, and for that, I’m so grateful. Thanks to Mme. A and Mme. S!

And my concerns about french have so far been unfounded. I thought that if I was worried about Josh adjusting in school, wouldn’t it be doubly hard in EFI? Having said that, I guess parents will worry about everything!

Josh has been loving the french part. Even Mme. A and Mme. S say that he has no problems using his french and being inquisitive about it. I’m impressed by Josh’s desire to pronounce words properly. I guess when you still can’t spell all the words, all you have is pronunciation.

The other day, Josh said he was going to say the word “No” only in french. From then on, Josh started saying, “Non”. And believe me, “No” and “Non” indeed sounded different!

I wasn’t sure, so I left it alone. Eventually, I looked it up and sure enough, it’s “ramasser”. I already believe Josh’s french will exceed mine sooner rather than later. Even Josh believes this…

And even in day-to-day interactions, sometimes Josh speaks in french (most notably with “merçi”) and then catches himself and changes to english. Mommy feels somewhat proud!

Josh’s birthday party today brought some closure to the questions I had about how Josh is doing socially at school. He mentions so many different kids and it was so nice to finally put faces to names. There is something discomforting about not knowing the other people who are now influencing your child's thought process.  I also had a chance to meet various parents and that added some comfort. We got to trade stories about the things our kids say about each other and it was such a relief to hear that they essentially tell the same stories! (More about the party later.)

When Josh turned five, he was already big into Lego. Well, that hasn’t changed. But his focus has changed from the cars, trucks and other vehicles of Lego City to the magical (and somewhat violent!) world of Lego Ninjago. It’s the first time I’ve seen him this interested in something. Not only does he play with Lego Ninjago, but he watches the shows on YouTube (there is a series) and he has gotten a couple of books from Scholastic and has been reading the books. He knows all the characters and the story of how the world of Ninjago came to be. And because if this, I know all the characters and how the world of Ninjago came to be!

Speaking of YouTube, I think we have been a bit too lenient in the kid’s usage of YouTube. Everytime Josh asks us for Lego sets, it’s because he saw it on YouTube. And I’ve noticed that when Josh takes movies of himself using my phone, he often narrates the way I hear people on YouTube narrating! On his birthday, he was Facetime-ing (?) with my mom. He was showing her how the Lego Ninjago toy that she got him worked. He was showing it to her like he was on YouTube! It was hilarious. I was wondering why he was talking like that!

But Lego Ninjago has had some good influences too. Josh wants to be a ninja (yes, he was a ninja for Hallowe’en). When he was in gymnastics class, he said that he liked it because it was helping him to do his ninja moves. And he has said that he wants to take karate now! The other day, he was racing around a play place and I stopped him when he said, “Mom, I’m a “good” tired.” (that’s a different story!). I told him that he should be in track. He asked what track was and I tried to explain it. After I explained, he thought about it for a second and then said, “But I don’t want to do track. I just want to do karate and swimming and parkour.” (Don’t even ask about the parkour!). 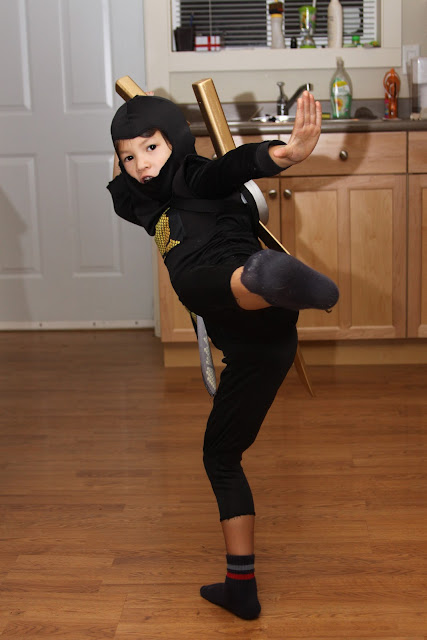 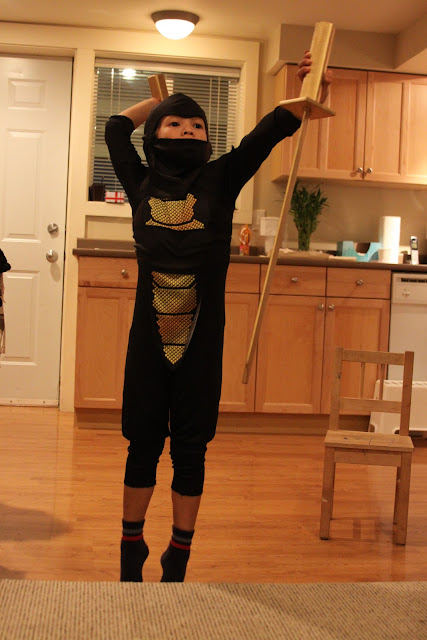 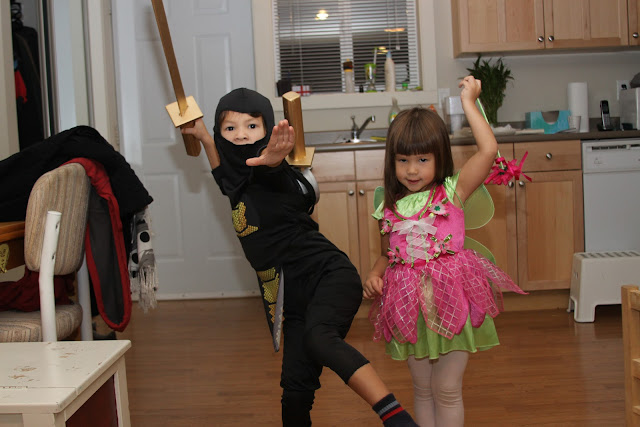 As usual, Josh is thriving in physical activity. He’s been loving swimming lessons and over the summer, we went to the local outdoor pool for public swims. At the beginning of the summer, Josh would look at the diving board (a low springboard) and even made an attempt by walking to the end and looking down at the water. He never jumped. Then, the Olympics happened. We watched some of the high diving and Josh asked lots of questions. The next public swim, Josh asked to go on the diving board again. This time, he jumped! Bri was in the pool waiting for him and he guided Josh back to the edge. By the end of the summer, Josh was jumping off the diving board forwards AND backwards. Also, Brian was no longer waiting for him in the pool. He was watching Josh from outside the pool, ready to jump in if Josh had any trouble.

Also during the summer, Josh continued to enjoy riding his bike and scooter. I think this will always be a favourite pastime. Even as late as the lovely October weather we had, Josh was still asking to go to the bike park to ride the ramps and bowls.

The past few weeks, we’ve also taken the kids public skating. While Aves loves skating right now, Josh has made it clear that as much as he likes skating, he doesn’t want to take lessons. Ugh. This hurts because the kid is good! He is fast! But, he doesn’t know how to stop and his turns are painful to watch because he’s going fast enough now that he should really be doing crossovers. We went skating while in Seattle and there was a small joke that Josh is actually faster than Auntie C. And he will just skate round and round and round the rink the entire time. When he falls down, he’ll get up and continue on. He really seems to like it! But. He won’t take lessons. Damn. 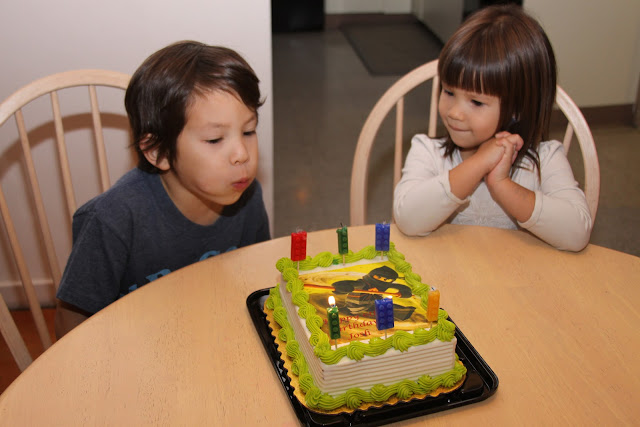 So, this brings us to Josh’s birthday party. Last year, for a guest list, we gave Josh names and he said yes to the names. This year, we let him come up with the names of the kids he wanted to invite to his party. He came up with ALOT of names. But we decided to have a Lego-themed party at the community centre, so this was fine.

Most of the kids were from Josh’s school, but it was so nice to see that he didn’t forget his “other” friends (mostly the kids of our friends!) and his 6-year-old cousins, too. This was the first time that we had a “drop-off” party and, for the most part, the parents just dropped their kids off.  Some parents stayed at the request of their child, which was understandable, given their age.

I was surprised by how little effort it was at the party (though the community centre also provided facilitators)!  The facilitators did a great job of mixing up Lego time with gym time and eating.

I asked Josh if he enjoyed his party and he did (despite still recovering from a fever that just broke the day before). As I said, I was glad to put faces to names of the kids that Josh talks about and it was so wonderful to see all these kids interact. Sometimes, it’s hard for me to see my little boy growing up but mostly, it just makes me proud.

Happy 6th Birthday, Josh! It is indeed 362 more days until your 7th birthday, but I’m sure you are going to fill every last one with all your adventures!