loss (aka loose, the sequel) 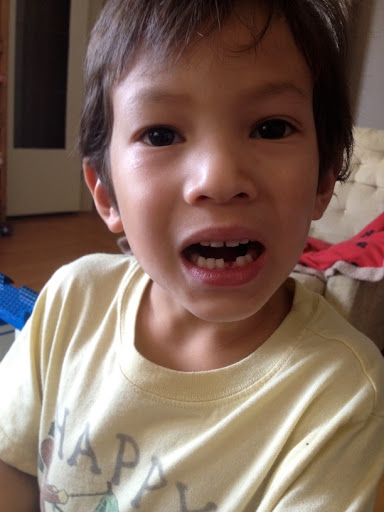 On Thursday, Josh lost his first tooth. Someone said (or I read somewhere?) that it can take a couple of weeks for a tooth to fall out after it starts wiggling. Well, just so you don’t have to do the math, it was 15 days from the time that Josh’s tooth started wiggling that it fell out. Unfortunately, Josh asked me this question because, I’m guessing, he wanted to know how long it will be for next time. Sigh.

I found out about the tooth when I was at work and when I got home, Josh was full of smiles and pride about the lost tooth. He was so excited and had so many questions about why his tooth fell out and when the “adult” tooth was going to come in and whether it was going to hurt. Little did I know that Josh was not all smiles and pride when his tooth fell out while he was in the morning line-up right before walking into his classroom. (I learned this the next day from the moms when I dropped Josh off at school.) Apparently, he was playing with the tooth while he was in line and his tongue pushed it out. He was upset and crying (possibly about the blood?) and when one of the mom’s reassured him that it was all ok that his tooth was suppose to fall out, he sobbed, “No it wasn’t! I pushed it out with my tongue!”. I guess at some point during the day, he managed to convince himself that it was all meant to be, because by the time I got home, there was no evidence of tooth loss trauma.

Instead, we started our discussion about the tooth fairy. We didn’t make a big deal about it, just explained that the tooth fairy takes the tooth and leaves something behind. Josh seemed to take this all in stride and didn’t ask too many questions. At bedtime, I put the tooth in a box (for ease of locating) and under his pillow. The next morning, Josh made no mention of the tooth! Ha. Clearly, surprises from the mythical tooth fairy are not high on Josh’s list of morning priorities. I asked him about the tooth and he said that he was waiting for me before he checked to see what the tooth fairy left for him. Hmmm…fear, perhaps?

We went upstairs and Josh pulled the box out from under his pillow. He started to get excited now that he had the box in his hands. He opened it and declared, “I GOT A GOLD COIN!”. I clarified that it was a loonie, but a big deal nonetheless. We started to talk about options for his “gold” coin. I told him he could put it in his piggy bank or, when we went to my work the following day, he could use to buy a treat from our vending machine. He thought about this for a bit and then he said, “Mommy, if I put my coin in my piggy bank, do I still get a treat from the vending machine?”. Damn kid. I gave a vague answer and he said he wanted just to keep the coin in the box (I guess he WAS pretty excited about it!). I said that was fine too, but when his next tooth fell out we would need the box for that tooth. Josh finally decided he wanted to put the coin in his piggy bank. Yay for saving!

Soon after this, Josh said, “Mommy, one of my friends gets more than one coin for his tooth.”. Dammit! Don’t kids know that they’re not suppose to disclose this information to each other?! (A friend likened it to grown-ups talking about salaries. Ha.) I can’t remember what I said, but I managed to skirt around the issue. There was NO way I was caving into tooth fairy peer pressure. When I went to drop off Josh at school that morning, I got clarity on this issue. Josh was still very proud of his absence of a tooth and went on to show his friends. One of the boys came up to me and said that when he lost his tooth, he got 2 coins because he lost his first tooth when he was a baby and the tooth fairy never came back then because he was too young. Aha! His mom confirmed that when his first tooth actually fell out, he was also given money for a tooth that got knocked out when he was a baby. Apparently, Josh seems to have selective hearing when it comes to coins from the tooth fairy!

And I’m still not sure how Josh is taking the whole loss of tooth experience. He keeps asking when the next took is coming in and that he can’t feel it. Today, he asked me if his back teeth will fall out too. I guess we will have to wait and see what happens when the next tooth starts wiggling...
Posted by Yvette at 9:03 PM

SO FUN!! I loved all the conversation that came about from losing his tooth, especially the part about his friend getting 2 coins. Ha ha!