Today was my first time flying through Washington - Dulles airport. As we were taxiing to the terminal, this is what we saw out of the window of the plane: 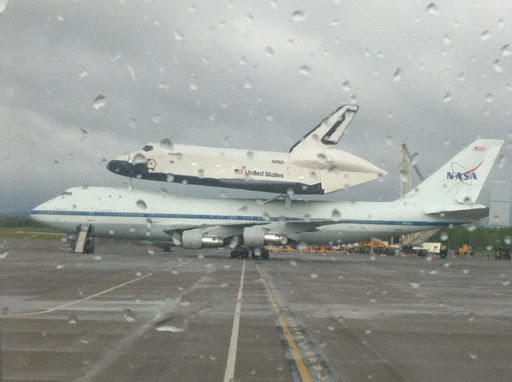 I was pretty amazed to see this! I thought maybe this was a common occurrence at Dulles and I was the only person taking pictures.

While we were on our outbound flight from Dulles, I found out that this was NOT a common occurrence. The space shuttle Discovery is being moved from Cape Canaveral to retirement at the Smithsonian’s Udvar-Hazy Centre. It’s apparently a big deal!

Well, big deal or otherwise, I thought it was pretty cool to get to see this right outside our plane window.

OK, I stand corrected.  This is not Discovery on it's way to the Smithsonian.  It's Enterprise on it's way to the Intrepid Museum.  Thanks for the correction, Dewey.  I'm impressed that you "took a closer look"!
Posted by Yvette at 1:42 PM

That is the coolest picture of the shuttle!

There was an article in the Globe and Mail about it because it was being retired to the Smithsonian. How amazing that you actually saw it up close!!

That is amazing! Thanks for sharing!

That is awesome! It flashes me back 23 years (Lyn & I got to see Atlantis launch when we were on our Honeymoon in Florida). Totally great that you were with-it enough to grab your camera!

Yvette, nice picture! After our earlier exchange, I took a closer look. You actually saw Enterprise in preparation to leave Dulles to fly to NYC, not Discovery, which flew from Cape Canaveral to Dulles last week and was already moved to the Smithsonian last Thursday. (There are also several differences between the two Orbiters, which Your photo is clear enough to show.) Discovery replaces Enterprise at the Smithsonian, and Enterprise will move from the Smithsonian to the flight deck of USS Intrepid aircraft carrier on the Hudson River in NYC. As I mentioned earlier, Enterprise is scheduled to do a low altitude flyover in NYC tomorrow, weather permitting, around 10 am. Latest schedule updates should be available on http://www.intrepidmuseum.org/shuttle/ .