For whatever reason, we never seem to make it to the pumpkin patch each fall.  But this year, Josh's school organized an outing to the pumpkin patch and today was the day.  Unfortunately, Josh has had a bit of a fever and Aves is coming down with a cold, but that didn't stop then from wanting to go!

As far as first outings go, the day was a moderate success.  It was overcast and drizzly, after a couple of days of sun (sigh!), but we dressed appropriately and went on our way.  There was a wagon ride out to the pumpkin patch - Aves said she was scared, but we managed to coax her on.

But when it came down to picking pumpkins, Josh and Aves just pointed.  That's right, pointed.  Because, apparently, the pumpkins were too muddy to touch!  Sigh again.  In the end, J&A pointed at one big pumpkin for me and Bri, and 3 little pumpkins for Josh, Aves and Miss Tess.  Not bad pointing. 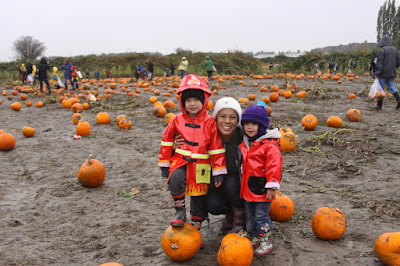 After pointing at pumpkins, we took a wagon ride back to the main area and when we came off the wagon, we were able to help ourselves to some of the apples that, I assume, came from their orchard.  I assume this because they were the most delicious, crisp, fresh apples.  Yum! 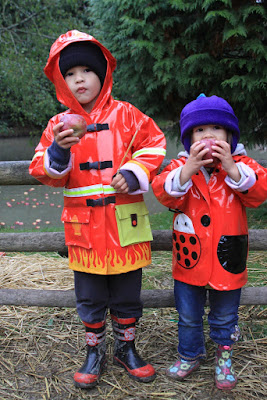 All and all, it was a fun trip to the pumpkin patch.  Despite the mud, cold and drizzle, Josh and Aves said they had fun.  Though, I will definitely make a mental note that we have to make mud pies with the kids sometime in the near future!
Posted by Yvette at 8:47 PM