We always knew that we'd get Josh on skates pretty early, but we never actually thought it would be this early! I happened to be browsing our local recreation guide and discovered that they had Parent and Tot skating lessions starting at 2.5 years old! Josh isn't quite 2.5 yet, but I figured that he started walking early, so maybe he would start skating early!

So, we figured we'd take Josh out on the ice and if he liked it, great! If not, then the program would reimburse us our money and we would hang up Josh's skates for a year and try again next year.

I debated whether I should get him regular skates or the double-bladed "Bob" skates. In the end, the decision was made for me because I couldn't find any regular skates in Josh's size. If anyone knows where I can find youth size 6 skates, let me know please! So, until his feet get a bit bigger, he'll have to settle for the Bob skates.

Well, we're not quite sure how Josh feels about it quite yet. Both Brian and I went on the ice with him. I wasn't about to hold on to a precariously balanced toddler in my "condition" but I wanted to get pictures and spend the time on the ice with Josh. Needless to say, Brian had to keep Josh on his 2 feet (as well as get his own skating legs back!) and he said that he felt it in his legs after the 25-minute lesson.

At the beginning of the lesson, Josh could barely stand on the Bob skates, much less move his feet. There was ALOT of falling down. By the end, he seemed to get the hang of shuffling his feet. He could shuffle around just holding onto one of Brian's hands! But the falling down had taken it's toll by that point and each time he did fall down, he cried. So, the brief 25 minutes on the ice was DEFINTELY enough!

But he's been talking about "Josh skating" and "hockey ball" lately and today, on tv, there were some little girls learning to play ringette. Josh watched the tv intently and then he enthusiastically said, "Guys skating!". So, I think he's ready for tomorrow's lesson... 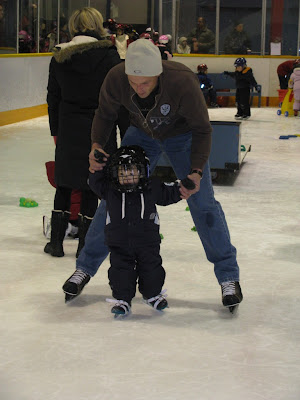 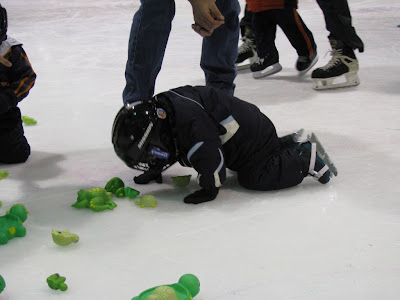 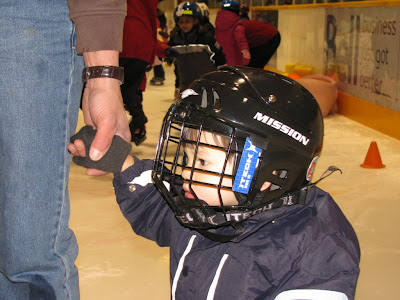 My sweet little manneke!! What a brave boy you are Josh....keep up the good work. Nana loves you sooooo much...XOXOXOXOX

Our next little "Wayne Gretzky"??
What a dear little man....look at the intensity of those beautiful big brown eyes! How we love you, Joshie!!