For the past few years, Christmas for me, and then for me and Brian after that, used to involve a decision about where we would spend the holidays - in Toronto? in Albany? in Maple Ridge? in Seattle? The last time I actually put up a tree in my house before last year was when I was still living at home with my parents!

Now that our own family is growing, we find that Christmas is more like the event it used to be when we were kids - this time, of course, we're the ones making it happen! Josh is only 2 years old and I'm sure he won't remember this particular Christmas, but he's having fun along the way and learning some Christmas traditions while he's at it! 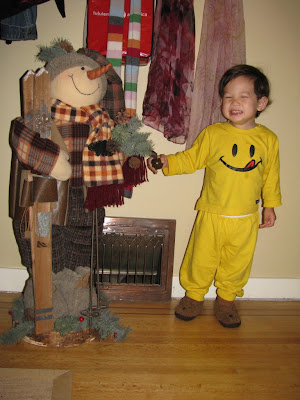 Brian got our lights up early this year. We had them on outside before December 1st! We did the tree the first weekend in December. Last year, Josh was too young, so we just did the tree after he went to bed. This year, we put up the tree with Josh. He was interested in the lights and ornaments, but he wasn't much interested in putting them on the tree... 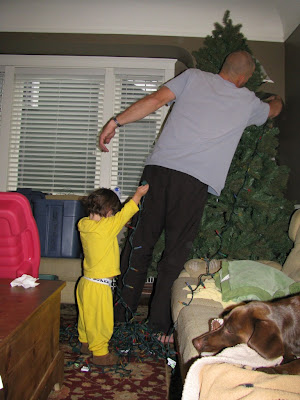 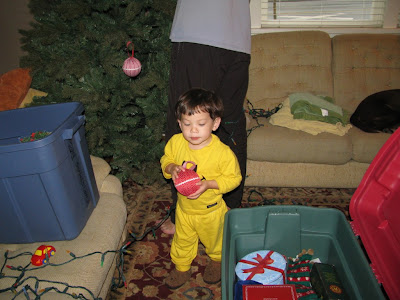 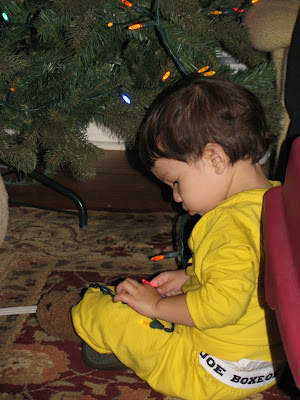 Josh was introduced to advent calendars this year. Auntie Val gave him a chocolate one, which he LOVED. He was good about having only one per day, though. And he was also good at recognizing the picture on the piece of chocolate! Funny how fast kids pick things up when there are sweets involved!

Also, Josh's buddy, Elijah's grandmother gave Josh an ornament advent calendar. There were 24 pockets on the bottom calendar, each containing a miniature ornament wrapped in tissue paper. The top part of the calendar is a Christmas tree, with 24 buttons on it. Each day, we would open an ornament and put it on one of the buttons on the tree. Josh had a blast. He would inspect each ornament, play with it for a bit and then we'd put it on the "tree". The last ornament, of course, was the baby Jesus. We told him that Christmas was the celebration of baby Jesus' birthday and Josh went right into a chorus of "Happy Birthday". Too funny... 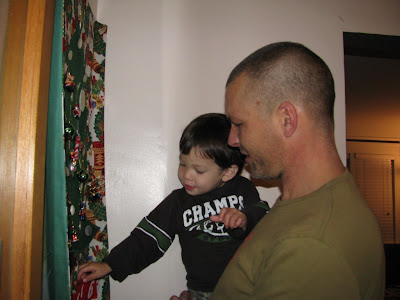 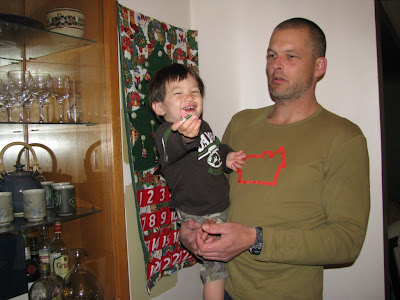 And then there was Santa. Last year's Santa photo was a bit of a disaster, but I figured I would try again anyway. After all, Josh DID warm up to the Disney characters after a couple of days on the cruise.

Josh's first encounter with Santa this year was at my company's kids Christmas party. He didn't seem to react to Santa. He had to go up to Santa to get his gift, but we didn't get him to sit on Santa's lap or anything. Josh seemed perfectly fine with all of it! 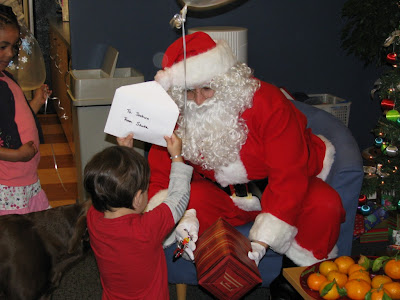 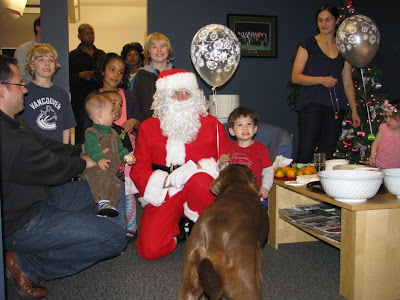 Next, we visited Santa at Motoring Munchkins. I asked Josh if he wanted to visit Santa and he said yes, so we joined the line! The resulting photo turned out pretty well! Josh would NOT sit in Santa's lap and he wouldn't even sit on my knee closest to Santa, but when I asked him to say cheese, he pulled off the cutest "cheese" smile. This was the result... 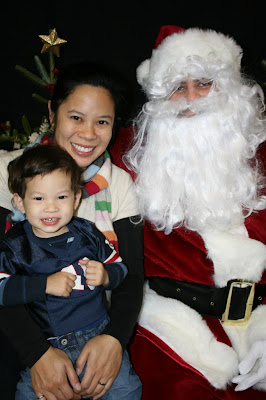 A week or so later, we were at Metrotown and I asked Josh again if he wanted to see Santa. Surprise, surprise - he said yes again! I coached him this time to sit on Santa's knee and he seemed pretty ok with it! Unfortunately, the boy in line before Josh wanted absolutely nothing to do with Santa and screamed and cried as his parents forced him on Santa's knee. Josh saw this and said, "Baby sad" all the while clinging to me with a kung-fu death grip. Needless to say, he wouldn't sit on Santa's knee after that, but we got a pretty good shot with him on my knee closest to Santa! 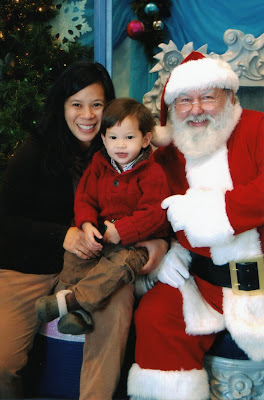 The Christmas season definitely seems more "festive" with a child. It no longer just feels like the time of year that you have buy presents for everyone and then eat a lot of food and spend a lot of time with family. It's actually a bit more fantastical, where you stop and look at lights and decorations, talk to Santa Claus and start your own little family traditions that your children will look forward to and remember for years to come.
Posted by Yvette at 7:47 PM

Yvette, the photo w/Santa is precious. You have to do it every year until hes about 5, OK? You got him to smile, Brian didnt even smile. Tks for the very nice Xmas card, too. Eve, Hian, and Brian.