Poor Nikita had an accident last week. The short story is that she was at Bri's job site and they were working on a demo for a reno. Nikita jumped up to where she knew there was a floor, but there was a floor no more. She didn't fall too far, but on the way down, she got a bad cut on her inside thigh.

The worst part was that she didn't act injured, so we didn't notice until a few hours later, at home, when Bri noticed she was licking herself in an area that was not her "privates". Nikita's not a cat, so she doesn't really lick herself anywhere, except her privates, unless she's nursing something. So, Bri took a closer look and he saw the 3-inch gash in her inner thigh. My heart sank.

We went to the animal hospital immediately and they confirmed she needed stitches. So, they kept her for a few hours while they sewed her up and she came home to us that evening, groggy and likely sore. She was hopped up on antibiotics and painkillers for a few days, so she was very low-key. But she was finished with a painkillers a couple of days ago and she seems more like her usual, energetic self.

It's been a pain because she's a bit like a bull in a china shop with her conehead. When she first came home, she was very awkward getting around with the cone. Anytime she would hit something (which was alot of the time!), she would back off. Now, she's used to the cone so she just bulls her way through when she gets stuck. Avery has gotten hit by a cone so many times, she is terrified of Nikita. And I've heard many exasperated "Nikita!"s from Josh. It's all a bit comedic!

Needless to say, we can't wait for Nikita to get the sutures, and her cone, removed on Monday. I'm sure Nikita feels the same! Here are some shots of her the night we brought her home from the hospital: 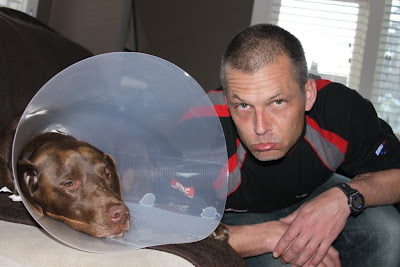 Poor girl, she had such a hard time getting in the minivan and then getting on the couch! 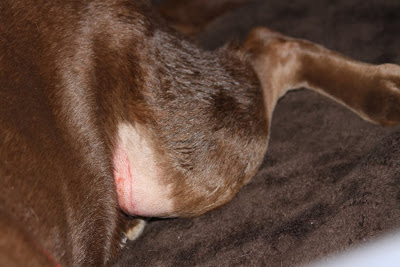 I tried to get a shot of the sutures, but this doesn't do it justice. All you can really see is a bit of redness that surrounds the sutured gash. 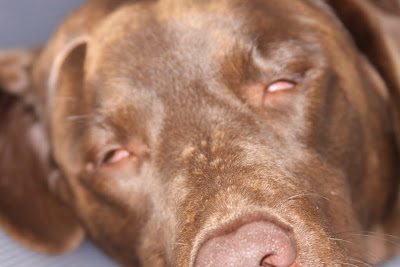 This is our dog on drugs. 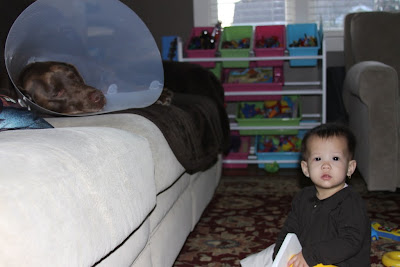 Wow. That is a serious cone. Lucy had a much smaller version when she was spayed. I also hear some people call them "Elizabethan collars," which I think is hilariously ridiculous.

Ohhh...poor puppy! Our dog had to wear a cone years ago....he used to run into the snowbanks with it and use it like a shovel in an attempt to open the velcro on the side. By the time he was finished with it, it was bent, dented and almost totally unable to close! lol I hope Nikita is feeling better soon:) Keep the drugs flowing....!

poor pups... hope she's fully on the mend. though the elizabethan collar is pretty funny