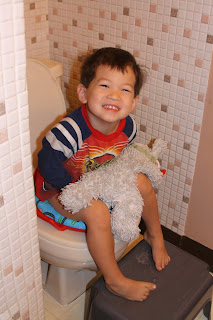 Josh had what I can only call an "a-ha" day on December 30th. Two things that he seemed to just "get" on that day were the "pee/poo" feeling and how to point and click with a mouse. I know, I know - completely unrelated. But I think something was going on in his brain that day and he just got it!

We never actually pushed the potty training issue with Josh. Honestly, he never seemed ready! Just after his birthday, the ladies at daycare started hinting to me that I should start potty training him. So, in a half-hearted effort, at the beginning of December, we started putting him on the potty and telling him once the diapers were finished, he had to do potty training.

He managed to do a couple of pees on the potty, but nothing significant. And he would say that he had to pee and he would sit on the potty for the longest time with no results. We even tried underwear on a couple of occasions and I think that scared him into holding his pee. One time, he didn't go pee for FIVE HOURS because we had him in underwear and he didn't want to go on the potty!

So, we let go of the issue over Christmas, but just after Christmas, on Sunday, December 27th, we were out of diapers and we told him that he had to wear underwear and pee on the potty. We stayed close to home and took him to the bathroom often. When we went out a couple of times, we put a pull-up on him. It seemed like a great start. He was peeing AND pooing on the potty!

Then, on December 30th, he started telling us when he had to go and each time he got on the potty, he would go almost immediately. Success! He understood that "feeling"!

It's been almost 2 weeks since we did the "cold turkey" training and he's had 3 pee accidents and 1 poo accident. Not too bad, so far! Also, he was refusing to go on any potty but the one at home, so when we were out, if he told us he had to go, we would go to the bathroom, put a pull-up on, he would pee and we would change him back to underwear. He has since started back at daycare and they tell me he is going to the bathroom there very well, so I'm hoping this will help to get him to pee on other toilets.

It's only been a short time, but I'm hoping we don't have setbacks. He seems to have caught on pretty quickly (he's 3 - so I guess it's about time!) and at least he understands the "feeling" now!

As for his hand-eye co-ordination with the mouse, he was never really interested in using the computer, so we didn't try to get him to use it. He likes to watch videos and look at pictures, but that was about it.

On that same day, December 30th, he was actually serving a time-out on a chair. It was facing the computer, so he was staring at the wallpaper photo of our family posing in front of our Christmas tree (circa 2008).

When he was done his time-out, he asked me a bunch of questions about the photo and pulled himself up to the computer. He grabbed the mouse and I just casually asked him to use the mouse to point to one of the ornaments on the Christmas tree. He did it! I was shocked! He did a bunch more and then I put on a kid's CD (Jump Start for Toddlers) that my sister gave me just for this purpose. He LOVED it! He asks to play his "video game" all the time now.

I never understood how you can teach that hand-eye co-ordination to a child and I still don't! He seemed to just "get it". It was truly a big day for Josh that day...
Posted by Yvette at 12:45 PM

When or if Josh ever gets married, this would be a great picture to have in the slideshow!

Congratulations! He looks so happy on it!

Good for Josh! We went through a lot of this with Aaron so I know what a good feeling it is :)

Hello "big" boy Joshie!
Nana is so very proud of you!!
You're learning so many new things each day/week/month, and before we know it, you'll be 4 years old and all grown up!! love you, with hugs from Nana

As I understand it, most kids are simply ready for this stuff when they're ready, and will take to it given the opportunity when the time is right.

Our oldest trained herself about the same age as Josh, in 2001, then her sister figured it out at the same time -- at only 18 months of age or so. Maybe she was prompted by her older sibling's success, but I guess she was also ready, and might have learned at a similar time anyway.

First, of some farming cultures' tradition (largely in Russia, I think) of swaddling infants on boards carried on their mothers' backs for the first year of their lives, while the moms worked in the fields. The kids rarely get a chance to crawl or move about much at all, but they're comfy back there. Then, when unswaddled after a year, many of them figure out how to walk within days, because it's time.

Second, the saying many of us parents hear when fretting about childhood habits such as soothers. "Had anyone ever heard of a youngster turning up to the first day of high school with a soother? The first day of grade 6, even? No. They figure it out themselves in time, when they're ready."