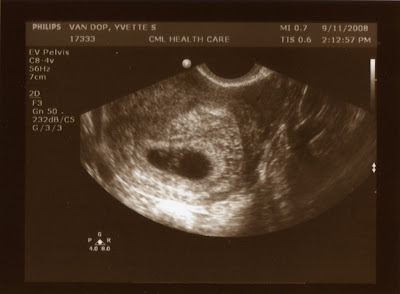 So, I'm sure that most of you guessed why I haven't been blogging. Either that, or I've already told you. iDop v2.0 is on the way. It doesn't promise to be better than iDop v1.0 (nicknamed "Josh") but it definitely promises to be newer!

The photo above was taken during my dating ultrasound. iDop 2.0 was only 7 weeks at the time. It's not much of a picture, I know. You can barely see the baby - my uterus is the black oval near the centre of the photo. The baby is the bit of fuzziness inside the black oval. Cool.

So, why haven't I been posting?! Well, from about 5 weeks until the last couple of days, I've been extremely nauseous and tired. I just passed the 12 week mark, so it's been 7 weeks of hell! Now, I haven't been puking up a storm - it's more like all-day nausea that causes alot of coughing and heaving. But between that and the fatigue, I've been keeping a pretty low profile. My doctor even prescribed a 2-week medical leave from work so that I could rest - I guess working and trying to take care of Josh wasn't really helping my situation!

Is it much different than when I was pregnant with Josh? Well, I'm not sure. I recall that I had all-day nausea when I was pregnant with Josh and it lasted well into the 2nd trimester. But I never missed work with Josh and I never took Diclectin. I think the difference is that this time around, I have to take care of Josh too! I don't have as much downtime with him around and that contributes to the fatigue, which contributes to the nausea. This is what my acupuncturist tells me, anyway.

I think Brian has been happy to keep a low profile too. With me laying on the couch most of the time I'm home, Brian has been doing the lion's share of the work around the house. He's been AMAZING! But I'm sure he's looking forward to me getting over this nausea and fatigue stage as much as I am. Well, maybe not AS much, but pretty close!

I'm due April 29th and I'm currently contemplating a VBAC, but my mid-wife says that I can change my mind at any time and opt for a scheduled Caesarean, in which case, they will refer me to an obstetrician.

We're also not going to find out the gender this time around. We found out with Josh because I felt like we needed to know to be more prepared. But this time, we don't feel we need to know to be any more prepared than we know that we are not! Plus, I also wanted to know what it feels like when the baby pops out and the caregivers says, "It's a {insert gender here}!".

To sum it up, I'm not very good with pregnancy, so I haven't been that good with this one so far. But don't get me wrong - I am thrilled that our family is growing again! It's been such an adventure being a parent and I can't imagine what happens when you throw another baby into the mix. Half the time, Bri and I feel like we're barely able to keep our heads above water trying to keep up with everything. But for some wickedly insane reason, we want to add to the craziness. It's AMAZING!

I can't wait to see what I say about life soon after the baby is born...YIKES!
Posted by Yvette at 7:54 AM

Congratulations! I hope you feel better soon. I took diclectin with my second born, and it helped a lot. It is a very safe drug, and really cuts the nausea. Rest when you need to. (Maybe it's a girl?)